Geli Voyante's Hot or Not - Guest post by Ellie Field

Brook Cottage Brooks is thrilled to  welcome Ellie Field to the blog. Ellie has kindly written a guest post. There is also a giveaway at the end! 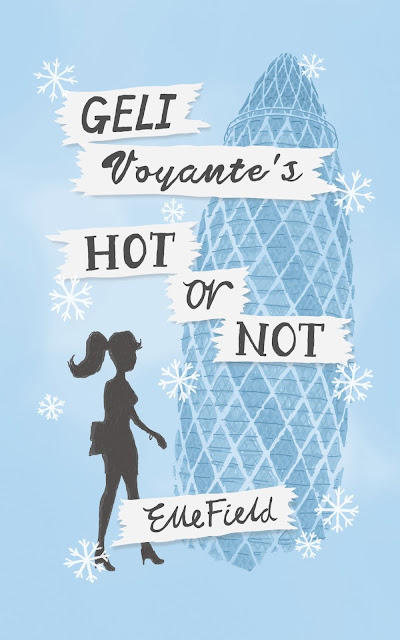 The problem with writing a book I've found - or maybe this is just me - is that when I sit down to work on one book, another four ideas immediately pop into my head. Those ideas, naturally, suddenly seem much more appealing and exciting than the book I'm working on at the time!
I suspect though if I did switch my attention to one of those other ideas, even more ideas would pop into my head. I suspect this is one of those writer-like quirks, otherwise known as having an overactive imagination! When this happens, I make myself jot down these oh-so-fantastic ideas, and then I explore them after I've finished the book I'm working on. It's a rule I've always stuck to.

However, I must confess something: I broke this rule when it came to Geli Voyante's Hot or Not, my new book that's out now. I was twelve or thirteen chapters into the first draft of The Dirtification of Tabitha-Rose - out in 2014, along with the sequel to my first book Kept - when inspiration for Geli Voyante's Hot or Not struck. The characters of Geli and Tiggy seemed so vivid and alive that I knew I had to (temporarily) abandon Tabitha and turn my attention to this new book.

It's not the only rule I broke. The one thing I love about writing is having the freedom to make anything happen and, in that sense, it's definitely OK to break the rules of reality. In Geli Voyante's Hot or Not, for example, the story revolves around rivals Geli and Tiggy who have similar taste in men, plus they also work for the same publishing family in the Gherkin... Of course there are no newspapers or magazines who have a home in the Gherkin, but that's what I mean about having the freedom to make anything happen and breaking rules - anything you can imagine is possible, even if it's not the case in real life.

I can't think of anything better than using my imagination and pen to make wonderful stories happen, even if I do get distracted by other book ideas. I'm glad I broke my own rule in this case though and immediately started working on Geli, and I hope that everyone loves Geli Voyante's Hot or Not as much as I loved writing it.
Do you have any writing rules? 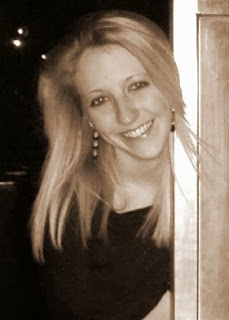 Elle Field is a twenty-something chick lit author who lives in South London with her boyfriend. She enjoys exploring and photographing Blighty's capital, seeing far too many musicals, and eating her way around London's culinary delights.
Her debut novel Kept was released earlier this year, and her next novel Geli Voyante's Hot or Not will be published on October 17th in Kindle and paperback formats. Watch out in 2014 for the release of Kept's sequel, as well as The Dirtification of Tabitha-Rose.
·         You can read Elle's literary, London and life adventures on her blog: http://www.ellefield.co.uk
·         Follow her on Twitter: @ellefie
·         Like her on Facebook: http://www.facebook.com/ellefieldauthor
·         Connect with her on Goodreads: http://www.goodreads.com/author/show/7060681.Elle_Field

Geli Voyante's Hot or Not blurb:
'I think I will always be known as the Hot or Not girl, defined by it for the rest of my career. Even my tombstone will read: Angelica “Geli” Voyante, beloved trendsetter. Death? Not Hot.

Yet, it doesn’t sound right. Why won’t anyone realise that there is more to me than this fickle persona I have inadvertently become?'
Geli Voyante is bored of being the Hot or Not girl, even if it has the perk of sitting next to Theo, the newspaper's very Hot political columnist. She's also getting a little lonely being single.
When her arch-nemesis Tiggy Boodles gets engaged, and other loved ones start to settle down, it's time for Geli to convince Theo that she’s not as shallow as her column suggests and, more importantly, she’s the one for him. Geli should remember though that there are always two sides to every story, and that applies to people too...
Elle’s first book, Kept, has 31 reviews on Amazon UK and is rated 4.5.  You can read the reviews on Amazon here

Geli Voyante is bored of being the Hot or Not girl, even if it has the perk of sitting next to the very Hot political columnist, Theo. Spurred on by her arch-nemesis Tiggy Boodles’ engagement, can Geli convince Theo she’s not as shallow as her column and, more importantly, she’s the one for him?

And, oh my, he’s Hot. Click, “view more photos”.
Crap. He is deliciously hot. Life is truly not fair. How is Tiggy Boodles, Tiggy Boodles of all people, engaged to a deliciously hot, thirty year old City boy who is probably worth millions by now and who, worst of all, looks nice? Not just nice in the looks sense, but like a nice person.
He’s tagged in an album entitled “Christmas with Shelter”. Calvin has sacrificed his Christmas Day to help others out and, by the looks of it, not only is this a regular Christmas occurrence, it seems Mr Murphy-Lee helps out all year round. I suspect he doesn’t do this to impress people either. I can tell this because he isn’t posing in any of the photos in the “look at me, look at me” manner I equate with Tiggy. He looks oblivious in fact.
How on earth has the evilest, most selfish girl in both hemispheres managed to snag a gorgeous, rich, nice man? How has she done it? She hates the homeless. She hates charity work. I mean, I suspect she even hates her own mother (justifiable, I’ve met Ursula), so what on earth has he seen in her? If it is true, if she really has managed to capture this man’s heart – let me face the gutting truth for one moment here, she has uncharacteristically kept quiet about him which smacks that this is probably the real deal – then where is my Calvin Murphy-Lee? This makes no sense whatsoever.

The giveaway for the blog readers is 2 x £10 (or equivalent USD) Amazon Gift Cards. 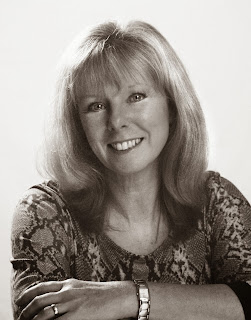 Hi Janice, and welcome to the blog. With spooky Halloween right around the corner, now is the perfect time for you to tell all the readers of the blog about your Voodoo Romance Series.  So, let’s begin our interrogation interview! Pull up a chair (though not the one plugged into the wall…………mwahhhhahhhahhhhaaahhaaa – cue thunder and lightning!) 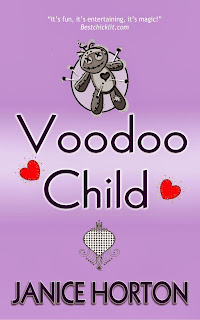 JB: Where did your inspiration come from for this series of spooky books?

JANICE: I believe the best inspiration for a story comes from something that happens in real life. The ‘what if?’ factor kicks in and my writer’s imagination takes over.  You might think it’s a bit weird and spooky, but I got the idea for the first book in this series on a flight back from the Caribbean. I actually witnessed a spat between two female passengers and one appearing to put a curse on the other. I’d scribbled the opening scene for ‘How Do You Voodoo? before we’d landed!

JB:  What sort of research did you have to do for the books?

JANICE: I’m guilty of enjoying the research as much as the writing! A central scene in the first book takes place at the Necropolis in Glasgow, a huge Victorian city centre graveyard known locally as the City of the Dead. I took a research trip out there on a grey autumn day last year and it was fabulously atmospheric and really spooky! 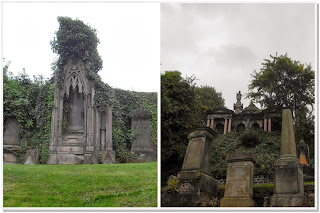 JB: Tell us the most interesting thing you found out about voodoo.

JANICE: I became pretty fascinated with Marie Laveau - the so called ‘Witch Queen of New Orleans’. You’ll find out a bit more about her in Voodoo Child.

JB:  Did you develop an unhealthy interest in voodoo or a healthy respect?

JANICE: I would say both. I loved reading about the nature of the ‘loas’ or spirits associated with the voodoo belief and I probably found out more than I needed to for the books. That said - I’m still an atheist!

JB:  Have you ever been tempted to try a bit of voodoo yourself?

JANICE: No. Definitely not. But that doesn’t mean I wouldn’t…!

JB:  Tell us a little about the main characters in the Voodoo Romance Series. 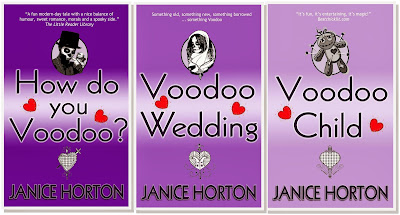 JANICE: The main characters are Nola and Louis. The three books in the series cover their relationship from how they meet and fall in love, get married, and have their first child. Just your average love story then, you might think? No, not really, because Nola starts off thinking she’s been cursed by voodoo and that Louis is a witch doctor. Actually, he’s a medical doctor and he prefers to believe in science and medicine rather than spells and magic. But as Nola gets to know his wonderful but wacky voodoo family, who are all quirky sub-characters in the plot, she gets to realise exactly what Louis is up against as there is magic and mayhem at every turn!

JB:  Tell us about a spooky thing that happened to you.

JANICE: At the Edinburgh Festival in August, I went on a midnight ‘ghost tour’ which included going down into Edinburgh’s vaults. The ‘Vaults’ are an underground network of dark damp and reputedly haunted tunnels under South Bridge where in the 18th Century the poor of Edinburgh lived and died. That was very spooky indeed. I can recommend the tour if you are in Edinburgh this Halloween! 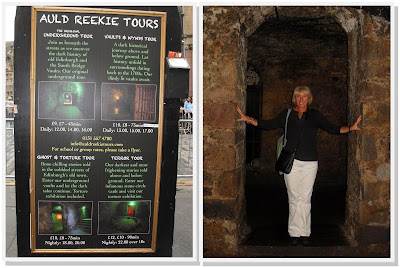 JB:  Do you have any Halloween traditions?

JANICE: Not now that our three sons are all grown up. But when they were young,  we would all dress up and do all the trick and treating and attend the party in the village hall afterwards, where there would be messy black treacle scones hanging on strings and apple dunking to be done in barrels of water. The Scots really do know how to celebrate Halloween. It’s always been a special event in Scotland.

Special Halloween Offer!
You can download the first humorous romance in this series How Do You Voodoo?
Absolutely FREE until the 31st October!
Amazon UK   Amazon US

About the Author: Janice Horton lives in Scotland. Janice writes contemporary fiction with humour and heart. Look out for her Amazon Kindle bestselling ebooks ‘Bagpipes and Bullshot’ and ‘Reaching for the Stars’ and her voodoo romance novellas. Her latest title is a nonfiction guide ‘How To Party Online’. Janice is a regular blogger and you’ll also find her on Facebook and Twitter. She is a member of the Romantic Novelist's Association and Editor of the Bookshelf Reviews feature at Loveahappyending Lifestyle Magazine.

Janice Horton - Contemporary fiction with humour and heart
My Author Blog
Follow me on Twitter: @JaniceHorton
Friend me on Facebook Page
Link to my Amazon Author Page
Check out my page on Goodreads
My LLm Bookshelf
Associate Editor at: Loveahappyending Lifestyle Mag