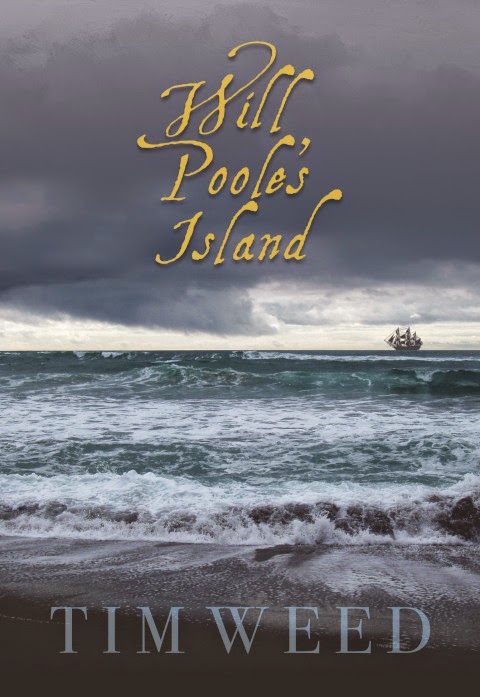 Will Poole's Island by Tim Weed

Hi there! Very happy to be asked to write a guest post for Brook Cottage. I thought I’d talk a little bit about the genesis of the book, and then give your readers a summary and a few quick blurbs that I hope you will find enticing. This book should be of interest to anyone who enjoys historical fiction, stories about early America, Native Americans, shamanism, and adventures set in the wilderness and upon the sea.

The book initially grew from a long-standing interest I have in family research. I have a number of English ancestors who came to America in the Great Migration of the 1630s. I also have Native American ancestors – my great grandmother was half Cherokee – and I was fascinated by that heritage. Most of the observations of Indians by these early English described them as tall, handsome, healthy, with exceptionally good teeth. And then there was the fact that English captives, especially young ones, were often reluctant to return to the settlements after they’d been ransomed or rescued – because the freedom and ease they found in Indian society compared favorably to the strictness and repression of Puritan society. I found this most provocative, and it gave me an important insight into the character of my protagonist, Will Poole.

In 1614, six years before Plymouth Rock, an English sea captain named Thomas Hunt kidnapped twenty-seven Algonkian-speaking Indians from different spots along the New England coast and sold them as slaves to the Spanish. Among this group was a Patuxet Wampanoag who called himself Tisquantum, a name that was later shortened to “Squanto.” Tisquantum managed to escape slavery in Spain and made his way to England, where he was taken up by a group of investors interested in colonizing the New World. Tisquantum spent five years in England and found his way home, only to discover that his entire band had perished in the devastating plagues that wiped out up to 95% of the population of coastal New England in 1616-1619. There is a character in my book, Squamiset, who has a similar story.

The collision of worldviews in 17th century America is almost impossible to imagine. On the one hand, you had a European society full of religious fervor and colonizing energy; on the other, a native society shattered and reeling from the greatest catastrophe it had ever known. But in at least one respect the two peoples were similar: they shared a deep-seated belief in the visionary and the unseen. English sailors reported a huge sea serpent coiled on a rock off Cape Ann. At Casco Bay near what is now Portland, Maine, a colonist reported using a hatchet to cut off the hand of a triton that had reached out of the water to grasp the side of his canoe. A woman named Mary Dyer was supposed to have given birth to a “thornback,” a creature with no head but horns like a goat, rough scaly skin like a fish, and the legs and claws of a hawk.

It was said that Indians’ holy men, the powwaws, could walk ankle-deep in stone and drive a person to madness with their screams. The strange walk of the powwaw, followed by the scream, was supposed to numb the attention of those watching so that they couldn't move a muscle. Dreams and visions were a means of sacred communication, putting the dreamer in contact with the mystical forces of the universe. This aspect of the 17th century worldview is strange to us, but it’s also fascinating to speculate about, and I felt that I needed to capture it, and account for it, in the book.

The problem was, the Puritans had come to America to escape “polluted” forms of worship. They believed that Satan was at large in the American wilderness, so it was natural that they would associate the Indians’ spiritual beliefs with devil-worship. At the same time, there were thousands of new English colonists pouring in, and all of them wanted to become landowners. So you had these coinciding interests, and this led to some pretty despicable violence. This too forms an important part of the backdrop for the novel, and a major source of conflict.

Novels are obviously limited in what they can achieve, of course, and in the end this is just a story. It’s a story about the friendship between a young man and an old man, their adventures and struggles and the landscapes they travel through, and the people and beings they interact with. Here are a few blurbs that I hope will pique your interest. The book is available in the US and UK in hardcover, paperback, and e-book.

“Immersive  . . . This riveting portrayal of early Colonial New England shines a speculative but compelling light on the time and place.” — Kirkus Reviews

“Tim Weed’s Will Poole’s Island is a doorway to an earlier world when the United States existed as a borderless tract of land whose dimensions could hardly be imagined. This is a superb novel, written with truth and daring at its core.” — Joseph Monninger, National Endowment for the Arts Fellow and author of The World as We Know It

“It’s been so long since I felt like a little girl in love with books again. Treasure Island, Island of the Blue Dolphins, The Yearling, lazing around on a spot of sunshine totally engrossed in this other, historical world, that’s how I feel about Will Poole’s Island.” — Suzanne Kingsbury, author of The Summer Fletcher Greel Loved Me

Tim Weed’s first novel, Will Poole’s Island, was published by Stephen Roxburgh at Namelos Editions in 2014. He is the winner of a Writer’s Digest Popular Fiction Award and a Solas Best Travel Writing Award, and his short fiction and essays have appeared in Colorado Review, Gulf Coast, Talking Points Memo, The Morning News, Backcountry Magazine, Writer’s Chronicle, Nantucket Magazine, National Geographic’s Intelligent Travel, and many other magazines and reviews.

Tim attended Middlebury College, the University of California, and the MFA Program for Writers at Warren Wilson College, where he had the privilege of working closely with some of America’s most accomplished contemporary authors. Based in Vermont, Tim teaches at GrubStreet in Boston and in the MFA Creative & Professional Writing program at Western Connecticut State University. He participates regularly as a visiting writer at literary festivals, writers conferences, and creative writing workshops in the U.S. and abroad.

In addition to his writing work he has more than two decades’ experience developing and directing educational travel programs around the world. He is currently a featured expert for National Geographic Expeditions on traveling programs to Cuba, Spain, and Patagonia/Tierra del Fuego. Tim speaks frequently on literature and the writing craft, Cuban and Spanish history, and the lives and work of international luminaries such as Ernest Hemingway, Charles Darwin, Rockwell Kent, Yvon Chouinard, Ursula K. LeGuin, and Francisco de Goya.