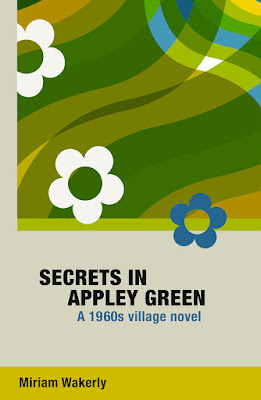 
Thank you so much for inviting me to be your guest on your amazing blog, Debbie/JB.

I thought I would switch myself about face, try and imagine myself as a potential reader of my new book, someone who has barely heard of ‘Miriam Wakerly’. Who? Amongst all the zillions of books on offer why would anyone zoom in on mine?

My typical reader is probably a woman, although my other books have been enjoyed by men too. And, for this Nineteen-Sixties novel, does that mean the reader is bound to be of a certain age, I wonder?

Well, here I am under-cover, wearing my cloak of anonymity, and the first two things I see are the title and the cover. Secrets in Appley Green  – hmm, that gets me imagining different kinds of secrets, good and bad. Well, for sure, I would need to read the book to find out what they are all about! 1960s design just screams out at me from the distinctive cover and I wonder why its focus is on something like fabric rather than a village scene. Is there a good reason for that? It’s supposed to be a village novel, isn’t it? Also, it’s classified as a ‘romance’, but I read somewhere that the author said the story is not a sweet romance, but rather a love story with a twist (ouch).

I like the idea of this village, where folks help each other – even if they do hide things and gossip! Now for the blurb: the idea of a schoolgirl getting pregnant from a fling with an older man, that is something that does ring a bell from my own memories of that era (not me, I add). I happen to be of that ‘certain age’ you see. I am curious to step back to that most exciting, culturally revolutionary, decade of all time, in my humble opinion, even if I do end up feeling mightily relieved not to be a teenager living in the Sexties (oops, Sixties) right now. In fact, I think my own daughters would be amazed to read about how materially lacking life was then, with no mobile phones, computers or eating out, lucky to have a TV, being gay still illegal, drugs … aah, nostalgia is coming over me in waves of mixed feelings. I wonder if this author did her research properly; I bet it’s full of those annoying anachronisms.

I haven’t yet read Wakerly’s third novel, Shades of Appley Green although apparently, Secrets in Appley Green is some kind of prequel. Uh? Well, that’s certainly different.  There seems to be a major cliff-hanger at the end of Shades … (reading the Amazon reviews) and Secrets … runs with that. Basically I am assured that I could read either book first, so that’s OK.

Well, now I know how a ventriloquist’s dummy feels. I am back to being me now, after that quite disturbing slip into a parallel world that is, perhaps, yours.
Be sure to let me know how you get on with Secrets in Appley Green in an Amazon review, won’t you?


In 1960 three naïve, but very different, Appley Green schoolgirls pledge to stick together for ever, but when one of them gets pregnant, this pushes their promise to the edge.
A young girl in need of love is vulnerable to the charms of a much older man with heart-breaking consequences.
This is Great Britain’s Sixties, gathering pace then in full swing as social change sweeps aside past attitudes, laws, fashion and culture. Youth is finding a voice as parents struggle to adjust.  Its characters span the full social spectrum and take us beyond Appley Green to Brighton, Margate, London, Vienna and Paris.
Miriam Wakerly’s  Appley Green village stories all standalone and can be read in any order, but they are connected. This one can serve as a prequel to all three, especially Shades of Appley Green.

Miriam Wakerly's new novel 'Secrets in Appley Green a 1960s village novel' is now available as both paperback and on Kindle! It begins in 1960, which makes it 'historical' romance!

She was born and brought up in Tetbury, Gloucestershire (of Highgrove fame) but has lived in Surrey for the past 37 years. With a degree in English, French, Sociology and Politics from Leicester University; a mixed working life that usually involved writing one way or another; and three adult children now flown the nest, she finally settled down to writing novels a couple of years before retirement.
Her previous (third) novel, Shades of Appley Green, is set in the same fictional Surrey-Hampshire village as her first two novels, Gypsies Stop tHere and No Gypsies Served. It is a 'modern village novel' set in around 2012. Her third and fourth novels have nothing to do with Gypsies.
Gypsies Stop tHere was launched the day after she stopped working. The Gypsy idea was seeded when working in the community supporting single teenage mothers when she thought the services being offered - support and information -should be extended to the Travelling community. Then excited and fascinated by the information she uncovered through reading; talking to Gypsies and Travellers; visiting sites; attending events; exploring websites of related organisations, she knew she had found her theme for a modern novel - perhaps many novels. More detail on this process can be found in her blog, Miriam's Ramblings. Many questions arose in her mind that her novels try to answer. She felt a need to reach out to people to help foster a better understanding of their current problems and erosion of their culture, but through a page-turner!
In 2010 No Gypsies Served was published, taking aspects of her theme further - looking at events of recent history to help explain current attitudes, for example. It looks back as well as moving forward.
Enjoyed by mainstream readers, her first two are also included on the recommended reading list for diversity police training; and some branches of the Traveller Education Service have used them in adult literacy classes.
She has spoken on many radio stations, especially BBC Surrey. She is one of the first Independent Author Members of the Romantic Novelists' Association and a long-standing member of the Society of Authors and LoveaHappyEnding.com. More recently she has run novel writing workshops.