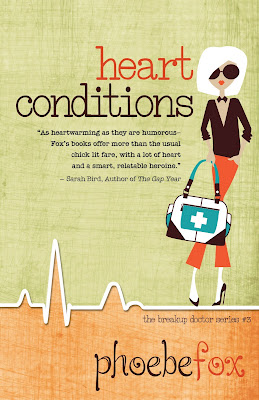 
Today I have the lovely Phoebe Fox as a guest on the blog. Congrats to Phoebe on her new book Heart Conditions which is released today! Phoebe very kindly agreed to be interviewed. Enjoy!

You are unmasking me!  Phoebe Fox is my pen name—I’m a book editor, and for professional reasons I like to keep my writing separate from my editing work. (Or am I in the Witness Protection Program…? Who can say for certain…)

Born in California, raised in Georgia, lived in NYC for a while (as an actor-waiter cliché), then my dear, darling Florida gulf coast…and finally settled here in Austin. Where I belong.

I eat way too many Cheetos. I’m six feet tall and have enormous feet, and yet also a serious jones for impractically high heels. When I start eating candy corn, I can’t stop. These may not be interesting facts so much as confessions.

What was the first thing you ever had published?
Thirteen years old, I wrote in to Parade magazine saying I was John Ritter’s biggest fan and asking for his autograph. (Remember him? Three’s Company? I wanted to marry him.) I was pretty excited—even more so when I wrote John Ritter and HE WROTE BACK! I still have the letter—written in longhand, actually by him, thanking me for my newspaper letter and my support. One of my fondest pieces of nostalgia.

Yes—get up and write until I have 1,000 words, minimum. If I don’t do that—make it a daily routine—I find endless and creative ways to waste time and not write.

To do it. See above.

The series grew from the first book—about a therapist who helps people get through their bad breakups, and then gets dumped by text message herself and starts breaking every single one of her own rules—which was born from many, many, many bad dates and breakups, mine and all my girlfriends’. And also from the book He’s Just Not That Into You, which changed my life and is the reason I’m happily married today—no lie. I wanted to write a book that I hoped would contain all the warmth and wisdom and common sense and wake-up call for women that Liz Tuccillo and Greg Behrendt conveyed in that book, but in fiction form. I hope I managed to at least come close.

The very first draft of the very first book in the series went to my husband. Who said, “It’s good.” And that was the limit of his feedback. We have both since learned that he’s a wonderful cheerleader, supporter, and fan of the books once they’re published, but a crit partner? Not exactly his forte—he’s a computer geek to my word nerd. We each play to our strengths…

I’m just about to finish book 4, OUT OF PRACTICE—the final book in the Breakup Doctor series. It’s a little sad to be leaving these characters now, but I’ve got a new series in the works I’m pretty excited about beginning.

I say this in nearly every interview: The best advice I ever got was from multipublished, ridiculously talented author Sarah Bird, who told me long before I was published or even had an agent that the only thing separating her from all her unpublished-author friends was persistence. Over and over again I have found that to be the most important trait any writer can have. Persist in writing. Persist in querying. Persist in trying to get published, to market your book, to write another book…and another. There are so many people and reasons ready to convince you that you shouldn’t—you have to be the #1 voice always reminding yourself that you should.

Thanks so much, Debbie—I love these questions! So glad to be on your blog. 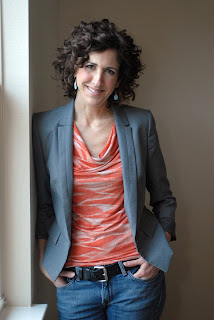 Author bio – Phoebe Fox is the author of the Breakup Doctor series—The Breakup Doctor, Bedside Manners, Heart Conditions, and Out of Practice, coming fall 2016—and has been a contributor and regular columnist for a number of national, regional, and local publications (she currently writes about relationships for the Huffington Post, Elite Daily, and She Knows). She has been a movie, theater, and book reviewer; a screenwriter; and is a close observer of relationships in the wild.

Running a massively successful relationship counseling practice should guarantee smooth sailing in a girl’s own love life. But Breakup Doctor Brook Ogden has spent the last year sifting through the fallout from the disastrous decision that led to her unconscious uncoupling with boyfriend Ben Garrett.

Despite advising her clients you can’t be friends with an ex, she and Ben have somehow begun to stitch together a friendship—one Brook hopes is slowly turning into more. That is, until Ben introduces his new girlfriend, Perfect Pamela, a paragon of womanly virtues who is everything Brook is not.

While Brook navigates her newly volatile emotional life, an unwelcome surprise shows up on her doorstep: the ex-fiancé who broke her heart two years ago—one month before their wedding. Between her ex’s desire to rekindle their attachment, her best friend Sasha’s unexpected crisis, and her own unsquelchable feelings for Ben, Brook finds herself questioning the personal progress she’s made in the last two years—and threatened with the highest-stakes Breakup Doctor failures she’s ever faced.

***NOTE: Book 2 in the Breakup Doctor series, BEDSIDE MANNERS, is on sale for only 99 cents this week, Feb 8-14, for the e-version, on all book sites!