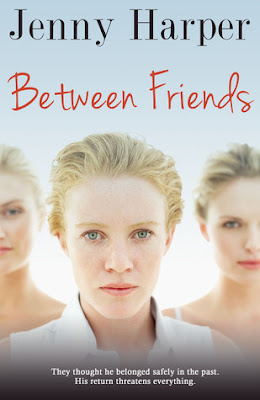 Between Friends by Jenny Harper

They thought he belonged safely in the past. His return threatens everything.

Marta, Carrie and Jane have been friends since they were at school in Edinburgh. Now one is bringing up her family, another is desperately trying for children of her own, and the third is focused on her career – and each takes the support of the others as a given.
But when generous Marta offers out-of-luck actor Tom temporary shelter, her act of kindness sets in motion a tsunami of destruction. Marta’s marriage comes under threat. Timid Jane is haunted by the secret she has been hiding since she last saw Tom. And ambitious Carrie finds herself at the mercy of a man who can ruin her career.

Only by pulling together can the friends rid themselves of this menace. But, is Tom too clever at sowing mistrust?

The premise for this story drew me in immediately..............lifelong friends. I have 5 lifelong friends and like the women in the story, we all went to school together. Now over 25 years later we are still friends. I love the whole idea of women forging friendships so strong and deep that they find they can barely function without them.

In the book, the bonds of friendship are really tested when Tom, ex boyfriend of Jane's is brought into the lives of the women again by the unsuspecting and 'do-gooder' Marta. Little does she realise that one act of kindness begins an almost domino effect that threatens to tear apart all the women have built up for themselves over the years.

Each of the three women in the story is uniquely different - Jane the home maker, Marta with her heart of gold, and Carrie who is the hard nosed business women who is so career driven she is blind to what is missing from her life. These were three women that don't immediately seem like they would be friends. Their outlooks and their morals are so different, yet for a number of years the bond that ties them together has remained strong.........until Tom.

In Tom, Jenny Harper has written one of those characters that gets right under your skin. Tom is the character that everyone loves to hate and boy did I hate that man! He was over confident, cruel and totally in love with himself! He was every bit the villain who was so self-absorbed that he left a total path of destruction wherever he went. But, Tom is a keeper of secrets................that is until he needs to use those secrets to improve his own situation and damn the consequences to others. They are literally collateral damage. The secrets he possesses about two of the women and the damage his mere presence does to another are nothing more than weapons he uses to his advantage.

Between Friends was a really enjoyable read and I found it very hard to put down. Tom really got on my nerves and I suppose that was the point. He was like an itch that was hard to scratch. At times the friends themselves were infuriating because they often couldn't see what was going on under their noses. So caught up in their own problems they let their friendships slip away instead of becoming stronger together.

The main message I took away from the book was that it only takes one person to totally destroy everything. Secrets from the past will always come back to haunt you no matter how deeply you think they are buried. And, friends are basically your other family and without them and their support, the world is a very lonely place. A recommended read from me!

Jenny Harper lives in Edinburgh, Scotland, though she was born in India and grew up in England. She has been a non-fiction editor, a journalist and a businesswoman and has written a children’s novel and several books about Scotland, as well as four full length novels and a novella in The Heartlands series (set in Hailesbank), and two short stories that have appeared in anthologies. Between Friends is her fifth full length novel.
Jenny writes contemporary women’s fiction with bite – complex characters facing serious issues.
What they say:
‘An engaging and delightful read. Jenny Harper is a most gifted storyteller.’  Alexander McCall Smith
‘Page turning and thoroughly entertaining. I loved it!’ Katie Fforde
‘The most beautiful love story that I have read in a long while. Amazon review of People We Love
‘This was a fun, heart-warming but also emotional story that had me thinking about the characters long after I’d finished it.’ Amazon review of Maximum Exposure
‘Ms. Harper has created a fully populated, very human and recognizable world.’ Amazon review of Face the Wind and Fly
‘There is everything I like about a novel in her writing: family, relationships, current affairs ... things the author seems well versed in. I loved the Scottish settings, and could visualise many of the locations in the book ...’ Amazon review of Loving Susie