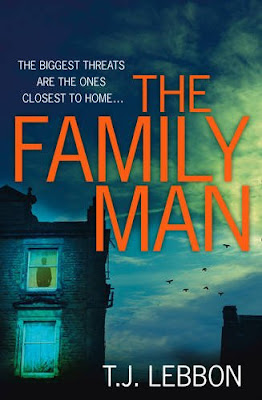 The Family Man by T.J Lebbon

Today I am thrilled to be part of the blog tour for The Family Man by T.J. Lebbon. I have a review AND a guest post for you. First, let's find out about the book.

Dom Turner is a dependable husband, a loving father. A man you can rely on. But it only takes one day to destroy a seemingly perfect life.

Emma thought she could trust her husband, Dom. She thought he would always look after her and their daughter Daisy….

Then one reckless act ends in two innocent deaths – and Dom’s family becomes the target of a terrifying enemy.
There’s nowhere to hide. They’re on the run for their lives. And if Dom makes one more wrong move, he won’t have a family left to protect.

The Family Man is just the sort of book I love! Dom is a dependable and might be considered boring. He is his own greatest critic, worried that his wife is bored with good old safe Dom. His friend Andy on the other hand is exciting, has a great physique compared to Dom's squashy middle and has the type of bachelor lifestyle that would make anyone jealous. What Dom doesn't realise is that his wife Emma likes Dom just the way he is. She likes their safe and happy lifestyle with their daughter. She doesn't trust Andy and she has good reason not to.

Andy and Dom meet regularly for bike rides. Keen cyclists, Dom plays it safe on the roads, much like his safe life, while Andy is a bit of a speed demon, taking risks. After their bike ride they like to stop in the village pub for a drink. Over one such drink the pair begin to joke about doing something illegal and what starts out as something they are playing about with in their heads, soon turns into reality with devastating and terrifying consequences that Dom could never have foreseen. Andy tries to reassure Dom that all will be ok but Dom is now suspicious that his friend is not who he seems. Dom has put himself and his entire family at risk and all to prove that he wasn't boring! And, in the background is the elusive and almost shadow-like character of 'Rose' who has her own tragic background but who has come back fighting.

The Family Man is literally a roller-coaster ride from start to finish. We've all had those conversations with friends whilst a little bit drunk. You know the ones that start off, 'Can you imagine what would happen if we did this...........' And, I think that's what makes this such a great story. It's not that far fetched! The idea that a quiet and normal man can have his head turned to commit a crime in a show of bravado fascinates me. T.J Lebbon has crafted a really interesting character in Dom. I particularly liked the fact that there were strong women in this book too who weren't afraid to kick a bit of ass!

This is an exciting read that will keep your nose stick in the book right until the very end. Great characters and great writing. Highly recommended if you like an edge of your seat thriller!

Most people have a runner's playlist.  I'm not like most people ... although I do a lot of running, I never listen to music.  This is partly because when I race, you're never allowed to listen to music on headphones as it's unsafe.  But the main reason is that for me, running is about blowing away the cobwebs, and I live in such a lovely part of the world that I prefer to just be a part of my surroundings.  Running is me-time, and one of the few times when I'd rather not listen to music.

I do, however, have a writing playlist that I go to again and again.

Lots of writers can't listen to music when they're writing, and sometimes I'm like that, too.  It all depends on what I'm writing––the complexity of the scene, the type of fiction, the feel I'm after.  Sometimes silence is best, sometimes a bit of background works better.  For me, music makes the world go around, so I'll usually prefer to be listening to something while I'm writing.

However, it needs to either be something I know so well that it is only background, or an instrumental.  It's impossible to listen to new music whilst writing, because I'm constantly listening to the lyrics.  But music I know well is fine.  It's like meeting new people, when you have to be alert and attentive, versus welcoming in an old friend, who you can happily sit with and not share a word.

So, here are a few favourite albums that I turn to again and again.  I've listened to them so many times that they're familiar now, and they can provide a great background theme to my writing:

Soundgarden –– A Sides: A greatest hits compilation from one of the greatest grunge bands out there.
Them Crooked Vultures: The only album from this supergroup consisting of Joshua Homme, Dave Grohl, and John Paul Jones.

Muse –– HAARP: Muse playing live, probably at their greatest moment in time.  Subsequent albums have disappointed me, but this is when they were truly mighty.

Thin Lizzy –– Life/Live: Thin Lizzy are one of my favourite bands, and this recording of one of their farewell shows, whilst not as technically brilliant as Live & Dangerous, is a classic.  It was also the first CD I ever bought, about 25 years ago.  £13.49, Our Price!  What a rip-off!

Royal Philharmonic Orchestra 100 Year Anniversary –– a 'greatest hits' of classical music, perhaps!  Perfect, and listened to many, many times, as is...

Sacred Spirit –– Chants and Dances of the Native Americans: My brother-in-law bought this for me for Christmas about 20 years ago.  That was a stressful Christmas for a couple of reasons, and this Cd has never failed to calm me and chill me out.  It might just be the most-played CD in my large collection.

Motorhead –– anything: If I don't have time for a run to blow away the cobwebs, this is the next best thing.  Lemmy's voice grinds out his terrific lyrics (really ... check them out), and they never fail to get me pumped up.  Top work-out music, too.  RIP, Lemmy.

There's lots more.  Frank Turner, Stiff Little Fingers, Metallica, AC/DC ... you might be getting the drift that I like a bit of rock music, yes?  You're right.  Alice in Chains, Pearl Jam, Flogging Molly, Dropkick Murphys... the list goes on.  Because music makes the world go around.