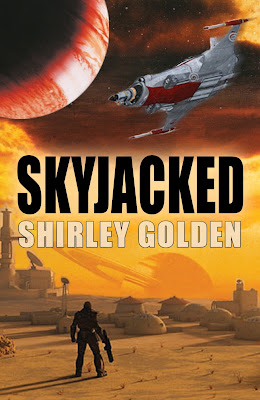 Today on the blog I am delighted to welcome author Shirley Golden. Shirley kindly agreed to an author interview. First, lets find out a bit about Shirley's book. You can win a copy of the book too!

The year is 2154, and Corvus Ranger, space pilot and captain of the Soliton, embarks on a penal run to Jupiter’s prison moon, Europa. It should be another routine drop, but a motley band of escaped convicts have other ideas. When Soliton is hijacked, Corvus is forced to set a new destination, one which is far from Earth and his son.

Unable to fight – or smooth talk – his way to freedom, Corvus finds himself tied to the plans of the escapees, including their leader Isidore and a gifted young boy who seems to possess strange abilities.
Desperate to return to Earth and the son he left behind, Corvus is thrown into the ultimate adventure, a star-strewn odyssey where the greatest enemy in the universe may very well be himself.


It's my real name.  Most people think my name sounds like a romantic fiction author, so it's not such a good fit for my preferred genre of fantasy.


Originally, I'm from Surrey, but I've lived in the Bournemouth area for most of my life.


My family owned a pet shop, which we lived above when I was growing up.


My first attempt at a novel (40,000 words and unfinished) was a fantasy epic that I wrote in my mid twenties, after being inspired by J.V. Jones, John Marco and George R.R. Martin. It was dreadful!


My proudest moment at school was for receiving a happy face for a poem I wrote when I was about eight.


A poem inspired by springtime, published in the local newspaper when I was sixteen.  It was structured as a sonnet – something I was unaware of when I wrote it.


I tend to write in the mornings and edit in the afternoons.  And tweet in the evenings (that's the plan anyway).  I suffer from insomnia from time to time, and I'll usually get up and write rather than try and fail to sleep.


No, it's very boring, but I have no rituals.


This is a difficult one for me to answer.  I've never had a fully formed idea that inspires me to write.  I usually begin with a character and build interactions around them.  I'm very much a pantser, so plot and themes are developed along the way.  Obviously, I must take ideas from my experiences, although I'd never do this consciously.


A friend of mine who is an avid reader, and occasionally writes is usually my first reader.  She is very kind and encouraging, but honest too.


Yes, I'm working on a novel involving witchcraft and doing loads of research into folklore, trees and mushrooms, and loving the wealth of language it is yielding!


Nothing new, but I think the best advice is, write because you love it.  Write for yourself.  And edit, edit, edit, if you plan to publish. 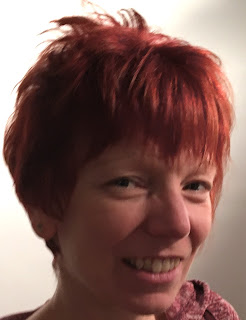 Shirley Golden's stories have found homes in the pages or websites of various magazines and anthologies, and also found their way on to competition long and short lists.  She won the Exeter Writers Short Story Competition in 2013.  She loves flash fiction and is one of the editors for the FlashFlood Journal, created by Calum Kerr, to celebrate National Flash-Fiction Day.  She is door person and arbitrator to two wannabe tigers, and can sometimes be found on Twitter when she should be writing.  Her debut novel, 'Skyjacked, a space fantasy, is available through Urbane Publications and Amazon.