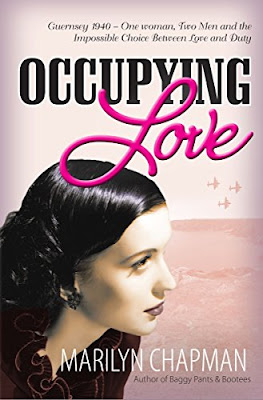 With the Nazis poised to invade Guernsey in 1940, feisty student Lydia Le Page returns from England on the day the island is devastated by the first bombing of the war on British soil.

When Martin disappears, Lydia discovers a secret from her past that threatens her future. Will she be able to keep it from the enemy? And will she choose love or duty?
Occupying Love is a story of love, loss and the identity that makes us who we are.

‘So you’ve met the handsome new rector, you lucky girl.’ Maggie’s eyes twinkled. ‘What did you think of him?’
‘He’s good looking, I’ll give you that. I gather you haven’t been introduced?’
‘I’ve had the odd glimpse since he replaced old man Ozanne, but believe me, tongues are wagging. Some folks say he’s a double agent put here by the Jerries, and that he daubed “V for Victory” on the prison walls. Isn’t it exciting?’
‘Exciting he may be,’ Lydia kept her voice casual, ‘but he’s not really my type.’
‘You mean you fancy him?’
‘I mean nothing of the sort, Maggie. He’s a rector, not a movie star – don’t you think of anything but the opposite sex?’
‘Not very often, to be frank. I think of food, of course, seeing as there’s never enough to go round, and going out after the curfew, and being able to buy whatever I like in the shops. What else is there to occupy my mind?’
‘You could help with the Sunday school at Torteval. The lady who leads it has gone to England.’
‘Me? Help with the Sunday school? You do make me laugh. There’s hardly any kids left on the island and those that are here wouldn’t gain much from me. Or much that would do them any good. I think all that book-learning’s gone to your brain. You need to relax a bit more.’ Maggie winked. ‘There’s a picture on at the Regal tonight. Do you want to come with me?’
Lydia pulled a face. ‘It’s German, with English subtitles. Are you still sure you want to go?’
‘You never know who you might meet.’
‘Oh, Maggie – you really are a hopeless case.’

Ever since reading The Guernsey Literary and Potato Peel Pie Society by Mary Ann Shaffer I have been intrigued by all things connected to Guernsey during the German occupation of the second world war. In Occupying Love, we meet  Lydia La Page who arrives back on Guernsey the day it is bombed by the Germans and is soon occupied. Lydia however does not take this lying down. She is proud and she is  apparently quite fearless in her resolve to help in the war effort and rid her beloved island of the enemy.

Lydia soon meets and is inexplicably drawn to the rector of the island, Martin Martell, who himself wants to get rid of the occupying forces. Martin runs a 'prayer group' that is not all that it seems and soon Lydia finds herself in a position of danger in an attempt to help The Resistance. She must befriend the Kommandant Otto Krueger in an attempt to find out what Hitler has in mind for Guernsey. Throughout it all, Lydia must keep many secrets, even from her own family and best friend. She must do things she had never dreamed of and put her own happiness on the line. Feeling like the rest of Britain has forgotten about them, the islanders must survive against all the odds. As Lydia battles to discover secrets about the enemy, she finds out some secrets about her own family that take her into a completely different battle. One between her heart and her head.

Occupying Love was a brilliant book. Marilyn Chapman has painted an extraordinarily bleak picture of what life must have been like on occupied Guernsey. This book has many really interesting and complex characters, the most complex I felt being Martin Martell. He is an extremely stubborn man and at times I wanted to bang his and Lydia's heads together! What comes across in the book is how bravery and heroism is portrayed in a myriad of ways and isn't always obvious. Throughout the horrendous time the islanders endured, the stiff upper lip was always there, with sacrifices and loss and grief evident throughout. A sense of pride for their heritage and love for one another gives them all a strength that is stronger than any invading army. A great book and highly recommended. I'd love to see another book written about one or two of the other characters, such as Maggie or Arthur. 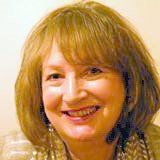 I got my first break writing in a football magazine when I was 15 and have been writing ever since. An NCTJ qualified journalist, I spent my early years on the Blackpool Evening Gazette and Lytham St Annes Express in Lancashire.  I then helped to set up a family PR and publishing company on the Fylde Coast and freelanced for national newspapers and magazines, including Woman.

My debut novel Baggy Pants and Bootees was released as an e-book in February 2014 by a small publishing house based in Britain and Germany. A time-slip novel set between World War Two and the ‘swinging sixties, it was published as a paperback in August 2014.
Born in Guernsey, I have always wanted to write a novel set in the Occupation of the Channel Islands, after hearing so many stories about life under German rule from my grandparents, whose home was requisitioned by the enemy. Occupying Love is the result.
After spending several years in the Midlands I now live in Lancashire with my husband of 45 years. We have two daughters and two granddaughters who we spend lots of time with.
A member of the Society of Authors and the Romantic Novelists’ Association I am currently working on a sequel to Baggy Pants and Bootees.