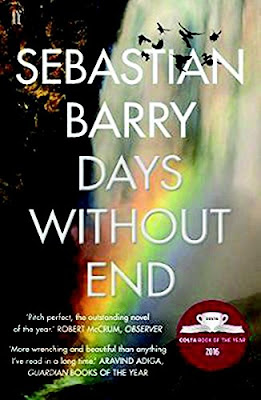 Days Without End by Sebastian Barry

Thomas McNulty, aged barely seventeen and having fled the Great Famine in Ireland, signs up for the U.S. Army in the 1850s. With his brother in arms, John Cole, Thomas goes on to fight in the Indian Wars—against the Sioux and the Yurok—and, ultimately, the Civil War. Orphans of terrible hardships themselves, the men find these days to be vivid and alive, despite the horrors they see and are complicit in.

Moving from the plains of Wyoming to Tennessee, Sebastian Barry’s latest work is a masterpiece of atmosphere and language. An intensely poignant story of two men and the makeshift family they create with a young Sioux girl, Winona, Days Without End is a fresh and haunting portrait of the most fateful years in American history and is a novel never to be forgotten

The main character Thomas McNulty is an Irish immigrant now in America in the 1800's. As a young teenager he meets the person set to become his lifelong friend, John Cole. The pair are nothing but poor homeless vagrants but soon find employment with Mr Noone, dressed as young women to entertain the miners in town. They love their life but eventually as they mature into young men they soon find need of different employment and both join the American Army to fight the Indians. Life in the army is pretty dismal with hunger, cold and sickness becoming enemies also on the battlefield. But, it is a better life than they could expect anywhere else, and certainly better than the life Thomas left behind in Ireland. Throughout their time in the Indian Wars they both witness all manner of atrocity with senseless killings that they themselves are part of.

When their time in the army comes to an end they set off together on a new life, taking them them a captured Indian child whom they name Winona. The three of them make a family of sorts and settle into life on the stage, back with Mr Noone, with Thomas dressing in drag and feeling more like the person he truly is. However, the onset of the Civil war soon sees Thomas and John joining the army again and leaving Winona behind in the care of a friend. And so, a whole new nightmare of war-time horrors awaits them before they are able to finally settle down once again as a family. However, war and death stalk them and they need to do all they can to protect Winona, no matter the cost.

This is the first novel by Sebastian Barry that I have read and I think that I was surprised by the writing style. The story is told from the point of view of Thomas. His language is raw and without frills or formality. His love for John Cole is more than a love of friends and the homosexuality element to the story was one that although I was not expecting, was definitely a beautiful love story that at times was overshadowed by the horrors of war. There are many passages within the book that are gory but they need to be as there is no flowery language that could describe the horrors of war or the atrocities carried out by man against his fellow man. At times this was a difficult book to read. The battle scenes in particular were vividly horrific and Barry doesn't hold back on his descriptions of murder and genocide of the Native Americans or indeed of the senseless killing of soldier against soldier. The beautiful blood-soaked land has many horrors buried by the end of the tale. The savagery of the land is described in wonderful detail to mirror the savagery of the people.

Despite these horrors which they not only witness but are party to, Thomas McNulty has an almost innocent expectation of what his life should be like with his handsome John Cole. He simply wants to be a family, albeit a rather unconventional family of that time. But, those who know and love the pair simply accept them for what they are. Throughout the course of the book the strength of love that Thomas has for John is stronger than the ravages of war and although many obstacles are put in their way they rarely leave each others side.

A well written book but written in a style that portrayed the rush of Thomas wanting to get as much of his story out as quickly as he could and the dialogue had its own rules. It's own way of telling the story. However, once into the book it is difficult to put down and the reader becomes so invested in the characters that it is difficult not to rush through the book to find out what life has in store for Thomas, John and their 'child' Winona.  Days Without End is savagely beautiful and is without a doubt set to become a modern classic. Its easy to see why it won the Costa Book of the Year in 2016.