Review + Giveaway: The House With Old Furniture by Helen Lewis 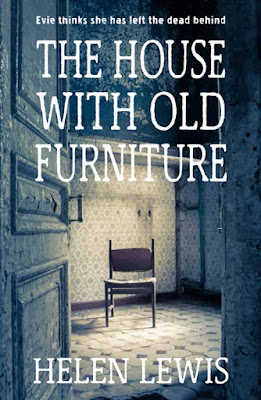 The House With Old Furniture by Helen Lewis

Evie has lost her eldest son, Jesse, to gang violence. Leaving the house he grew up in is pulling apart the few strings left holding her heart together. Only the desire to be there for her younger boy, Finn, impels Evie to West Wales and the ancient house her husband is sure will heal their wounds.

Days later, Andrew is gone – rushing back to his ‘important’ job in government, abandoning his grieving wife and son. Finn finds solace in the horse his father buys by way of apology. As does his evasive and fearful new friend, Nye, the one who reminds him and Evie of Jesse… Evie loses herself in a dusty 19th century journal and glasses of homemade wine left by the mysterious housekeeper.

As Evie’s grasp on reality slides, Andrew’s parents ride to the rescue. It is clear that this is a house they know. They seem to think they own it, and begin making changes nobody wants, least of all Alys and her son, Nye, the terrified youth who looks so like Jesse.

Every so often a book turns out to be something completely different than what you were expecting. And, The House With Old Furniture is that book. Please don't be put off by the title, which in my opinion does this book no justice and doesn't really reflect the true story. But, that aside its a fantastic book.

Set in modern times, as a result of the murder of their eldest son Jesse, Evie and her husband and youngest son Finn move from London to rural Wales. Evie feels like her heart is being ripped out having to leave behind everything that is Jesse but Andrew feels that this is the best thing for them. Evie really didn't get much of a say in the matter, much like anything else. Her descriptions of how she feels about Jesse actually broke my heart. Evie's pain is almost palpable and I found myself crying with her. Despite her husbands hope that the move will go some way to repairing his broken family, Andrew works in Westminster and Evie and her son Finn are going to spend long amounts of time alone together in the new house, Pengarrow. Isolated and at times afraid.

When they arrive Evie and Finn soon meet a woman who arrives one morning at their home, cooking for them and being a presence there. Almost like a housekeeper, albeit an uninvited one. She has a strong connection to Pengarrow which soon becomes evident. With her, her teenage son Nye who also makes regular appearances, befriending Finn. Nye looks very like Jesse and both Evie and Finn find this very unsettling. However, despite the startling similarities in their lives, there is something a little different about Alys.  Alys soon becomes  a source of comfort to Evie who finds her old diary and discovers so many secrets about her and her past. Evie soon learns much about Alys' experience and about her broken heart and what ties her to Pengarrow.

Throughout the book the theme of the First World War looms large. The detailed accounts in the book of what life was like The Front are horrifying.  Its seems that everyone in this book is fighting a battle of sorts. The fear of mother's losing their sons is an emotive topic both past and present. The story is told from both the perspectives of Evie and Finn and switches from the at times confused, lonely and sad adult language of Evie to the childlike and often straight to the point view of Finn.

However, soon the spectre of grief, which has never really left the family rears its head in all its force and is something that appears to hit Evie hardest. Finn is often forgotten about, a mere shadow in the family. Andrew puts on a brave front, burying himself in his work. For Evie, life falls apart and we learn more about her own history and the fact that she has never been accepted by Andrew's parents.

If there was ever a character written who didn't have a backbone it was Andrew. Helen Lewis has written him in such a way that the reader feels as frustrated with him as Evie is. However, he is nothing compared to his parents! At times I did get very cross with how they treated Evie and how ineffectual Andrew was in defending her. Their lack of compassion was at times shocking.

This book explores many issues such as grief, the horrors of war, social class and mental health. The characters are multilayered, each with an interesting and at times surprising back story. Just when you think you've got to grips with them, you find out something else!  For those looking for a book with mystery, family secrets and the story of someone so broken that the world is no longer able to contain her grief and her grip on what is real and what is not slips with devastating consequences for her.  Evie has a desperate need to make the world stand up and take notice that her heart has broken in two.

It's a passionate book with an added paranormal element to it. One main message that came across was that you can't run from your past, but face the ghosts that haunt you. Just what secrets really do lie at the heart of Pengarrow? You'll have to read the book to find out! Helen Lewis has a real talent for descriptive language and it was easy to imagine myself in Pengarrow. Like Evie I loved its charm and was a little afraid of what lay within its heart. A truly brilliant piece of writing and up there with my highly recommended reads.

Helen was born in 1967 in the New Forest. She spent her childhood dreaming of becoming a ballerina and doodling in the margin. She graduated from Southampton Faculty of Art and Design (so long ago now, that the place doesn’t even exist!) and worked as a professional Doodler of Margins (Graphic Designer) for twenty years. In 2006 She moved to Pembrokeshire with her family and lives in the middle of nowhere where she reads, writes, and runs.
Facebook: https://www.facebook.com/helenlewisauthor
Twitter:  @hedlew
Blog: http://www.helen-lewis.co.uk/blog
Website: www.helen-lewis.co.uk