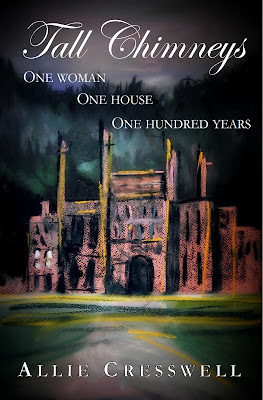 Considered a troublesome burden, Evelyn Talbot is banished by her family to their remote country house. Tall Chimneys is hidden in a damp and gloomy hollow. It is outmoded and inconvenient but Evelyn is determined to save it from the fate of so many stately homes at the time - abandonment or demolition.

Occasional echoes of tumult in the wider world reach their sequestered backwater - the strident cries of political extremists, a furore of royal scandal, rumblings of the European war machine. But their isolated spot seems largely untouched. At times life is hard - little more than survival. At times it feels enchanted, almost outside of time itself. The woman and the house shore each other up - until love comes calling, threatening to pull them asunder.

A century later, a distant relative crosses the globe to find the house of his ancestors. What he finds in the strange depression of the moor could change the course of his life forever.
One woman, one house, one hundred years.

Some writers start with the plot. They have it mapped out in their heads - or literally - from beginning to end, before they write a word. Of course books that deal with real events have to be plot-driven, they are constrained by facts. A writer can’t give Anne Boleyn a happy ending (unless she writes fantasy); whatever twists and turns her story takes, the scaffold is its inevitable destination. But even books which deal with imaginary events can be plot-driven if the writer has designed an end-goal - a wedding, a death, an explosion, a verdict - at which they must eventually arrive. The writer of plot-driven fiction will bend characters to his will, guiding them in the direction he wants them to go. That doesn’t necessarily make them weak characters, but it limits their spontaneity. Sherlock Holmes, for example, couldn’t have been permitted to dig his heels in about that trip to the Reichenbach Falls!

But not all books are made that way. Mine aren’t. I write character-driven fiction where the characters dictate the way the story develops. I begin with an idea, I invent the characters, and I let them play it out. I never know, when I begin, how the thing will end. I can’t see the end from the beginning and sometimes not even until it is 3/4 finished. Characters arrive for whom I have no clear plan - Mitch, for example, in Relative Strangers, was an enigma to me until almost the last chapter, when I suddenly knew why I needed him. Characters keep me in the dark. I didn’t know who Molly’s love interest was, in Tiger in a Cage, until that blizzard struck and he emerged out of the storm. Kenneth, in Tall Chimneys, was supposed to be a peripheral character, but he had other ideas.

Having no end in view when I begin is pretty terrifying, so this is the strategy I have come up with.
I imagine each new book as a visit to a place which is unknown to me. I travel alone. My sojourn is of an unspecified duration. I must stay until the task is complete.

I start at a pleasant hotel where I breakfast well. The weather is always fine and I stand on the front step of the hotel and survey the options open to me for that first day of exploration. I might see, for instance, a tree-lined lane which leads to a stone bridge across a river. Alternatively, there might be a steep path up a hill which promises good views. Thirdly, I might see a bus stop. These are the alternatives which are available to me as I start writing on day one, three different directions the plot might follow.

I’m using a metaphor here, you understand. Literally, I might be looking at the character going to work as normal, or packing a bag and leaving her husband, or suffering a heart attack and ending up in Intensive Care where she meets an elderly woman who entrusts her with a secret…… But I mustn’t rush things.

And I simply pick one. Let’s say I pick the lane to the river. I amble down it, I describe the scenery, I stop to watch some lambs in a field, I chat to my character companion, to get to know her better. Perhaps she tells me about her childhood, or maybe she tells me about her alcoholic husband, or the issues she’s having with her boss at work. Finally, we arrive at the bridge and look over the parapet at the water below. The Inn is still visible from here. There is no sign of a break in the weather. I am not so far from my beginning that I could not retrace my steps.

Reassured that I am nowhere near a point of no return, out an any limb or trapped in a dead-end,  I look forward. A stile, perhaps, across a field toward a copse. A bridleway which follows the bank of the river. Or, what’s this? A car, waiting in a layby, its engine running, its passenger door tantalisingly open. And if it seems to me that one of those choices is right for the character, one she really would take - knowing her, as I am beginning to do, now - on that bridge is where I will stay until the next time I sit down to write. If none of them seems right, I go back to the Inn and start again, with the hill path or the bus.

Each day I write only as far as I can see in the story, gradually acquainting myself with the characters as I go, making sure that the things they do and say are consistent with the way they are emerging from their chrysalises.  Occasionally they surprise me. I might have one leg over the stile when I see her leap into the car. Then I have to adapt. I have to allow her to lead. It is at moments like that, when the characters take on a life of their own, that I know I am getting it right.

People ask me how I know. I can only say that I do know, deep down, in a sort of writing-knower. I guess it is the same way a musician knows a bum note when he hears one, or a navigator has an intuition for true north. Call it instinct. Call it an understanding of human nature.
My methodology results in writing which is quite episodic. I think the reader can probably tell when one day of exploring ended and another began. The story reaches a trig-point, a way-point, as I did when I was writing it. And what will happen next is anyone’s guess - including mine! 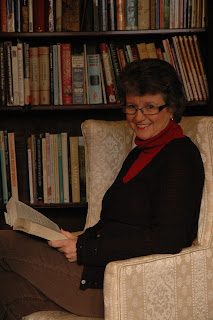 Allie Cresswell was born in Stockport, UK and began writing fiction as soon as she could hold a pencil.

She did a BA in English Literature at Birmingham University and an MA at Queen Mary College, London.

She has been a print-buyer, a pub landlady, a book-keeper, run a B & B and a group of boutique holiday cottages. Nowadays Allie writes full time having retired from teaching literature to lifelong learners.

She has two grown-up children, one granddaughter and two grandsons, is married to Tim and lives in Cumbria, NW England.

Tall Chimneys is the sixth of her novels to be published.