Review: The Mermaid and Mrs Hancock by Imogen Hermes Gowar 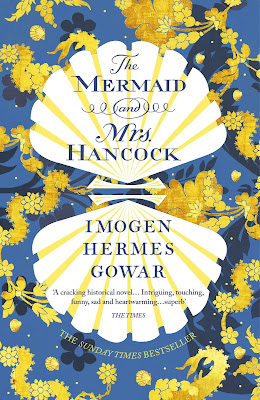 The Mermaid and Mrs Hancock by Imogen Hermes Gowar

This voyage is special. It will change everything…

One September evening in 1785, the merchant Jonah Hancock hears urgent knocking on his front door. One of his captains is waiting eagerly on the step. He has sold Jonah’s ship for what appears to be a mermaid.

As gossip spreads through the docks, coffee shops, parlours and brothels, everyone wants to see Mr Hancock’s marvel. Its arrival spins him out of his ordinary existence and through the doors of high society. At an opulent party, he makes the acquaintance of Angelica Neal, the most desirable woman he has ever laid eyes on… and a courtesan of great accomplishment. This chance meeting will steer both their lives onto a dangerous new course, a journey on which they will learn that priceless things come at the greatest cost…

What will be the cost of their ambitions? And will they be able to escape the destructive power mermaids are said to possess?

In this spell-binding story of curiosity and obsession, Imogen Hermes Gowar has created an unforgettable jewel of a novel, filled to the brim with intelligence, heart and wit.

Shortlisted for the Baileys Women’s Prize for Fiction this book is set in 1780’s London. This book was also part of the Book Club panel at the Open House Festival where I was a panel member and was really well received among those who attended the event and definitely not what a lot of people expected.

Jonah Hancock is a prosperous merchant who  lives with his niece and housekeeper. He is a widower sadly, his wife died in childbirth and his newborn son shortly thereafter. When the captain of one of his ships returns to London again he is no longer in possession of Jonah’s valuable merchant ship but instead brings him a mermaid. The mermaid is of course dead but the captain of the ship is sure that all of London’s finest will pay huge sums of money to view the curiosity. After all, nobody has ever seen a mermaid before. Jonah is of course rightly skeptical. To him, this seems like an absurd idea but the Captain's excitement is contagious and soon Jonas finds himself caught up in it all.

Jonah initially sets up viewings of the mermaid and much to his surprise, people flock to view the mermaid. It’s when he is approached by the madam of a high class brothel that Jonah’s life takes an even unusual turn. She wants to hire the mermaid from Jonah to be the centre piece of one of her infamous parties. Her 'guests' are people in positions of power and will pay handsomely to see the mermaid. Jonah, ever the businessman agrees. It is here that he meets the courtesan Angelica Neal, desperate to meet a gentleman of good standing. She does not wish to go back to work in the house of ill-repute after experiencing life outside as a lady. Jonah Hancock becomes obsessed by her and she asks him for a mermaid of her own. A request that has far reaching implications for all when their lives become polluted by the desire for a mermaid.


I thought this was an interesting concept for a book. I like historical fiction but it wouldn’t be my favourite genre. I did however enjoy this book. Wonderful detail throughout perfectly describing this period of history. Some parts of it weren’t pretty. It could be a harsh, difficult time for those without money. The struggle to be someone or retain one's standing in the best social circles was cutthroat and could come to an end at any given moment.

Angelica Neal was without a doubt my favourite character. She, like the mermaid is an object of curiosity, a trophy, desired by men. Bought and paid for. And, despite the sordid world she grew up in, there is still an air of innocence in her thinking. Although her expectations of what her position could offer her are unattainable, her relationship with Jonas Hancock give her a glimpse of the life she so desired. Initially, he was merely a stepping stone to get her to where she needed to be and deep down Jonas knows this. It is a relationship borne out of necessity rather than love, growing into something beneficial and satisfying to them both and Angelica, as a person finds her priorities change. Her feelings change. She evolves and to a degree grows up.

Lots of really interesting characters who were loud and colourful, each with an air of sadness that hung over them, much like the feelings the mermaid induces. While nobody in the book ever actually catches sight of the elusive second mermaid, her presence is cloying, oppressive and mysterious. Beautifully descriptive language with quite a unique writing style. Impressive for a debut novel. Highly recommended!