Extract: Christmas With The Shipyard Girls by Nancy Revell 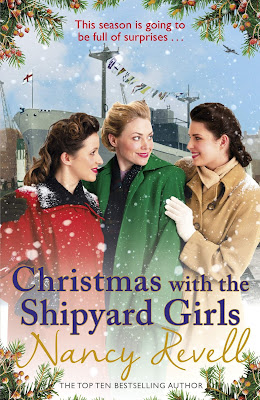 Christmas with the Shipyard Girls by Nancy Revell

Sunderland, 1942: Christmas is fast approaching and with it comes a flurry of snow and surprises…

Against all odds, Polly’s fiancé has finally returned home from the front line. If they can keep things on an even keel, she might get the winter wedding she’s always dreamed of.

Meanwhile shipyard manager Helen is determined to move on after a turbulent year. Her sights are set on breaking the yard’s production record and no one, not even the handsome Dr Parker, is going to get in her way.

And head welder Rosie’s little sister Charlotte has turned up unannounced. Why is she back and so set on staying?

Join the shipyard girls as they navigate through life, love and war this Christmas.

Praise for the Shipyard Girls series:

'the author is one to watch' Sun

‘A brilliant read’ Take a Break

‘Well-drawn, believable characters combined with a storyline to keep you turning the pages’ Woman

Christmas with the Shipyard Girls
Extract 2

Tommy felt the warmth of a kiss. Soft lips were being pressed against his own. He believed it to be a wonderful dream. One he’d be happy to remain in for eternity. And then he felt a fluttering of whispered words in his ear.

‘I love you, Tommy Watts.’ And something told him this wasn’t a dream. Wake up! Wake up!

He forced his mind to pull itself forward, to drag itself out of the dark, cloying slumber that had seemed to encase him for so long. He forced his eyes to open for the briefest of moments. Could it be? Please, don’t let this be some cruel trick of the mind!

‘Is that my Pol?’ His words were barely audible, as though part of him did not dare to ask, knowing the madness that would ensue if what he believed was not true.

He heard the words and the tears that were being choked back; felt a hand on his own, squeezing him gently. It took all his strength to reach over and feel the hand that was holding his. It was real.

‘It is,’ he managed to say, a smile stretching across his face. ‘It’s my Pol!’He managed to keep his eyes open for a few seconds, drinking in the face of the woman he loved. ‘I thought I’d never see you again,’ he mumbled.

‘I didn’t think I was going to see you again either,’ the soft, lilting voice of his beloved said back to him. He was losing the battle to stay awake. He had to know.

‘Do you still want to be my wife?’ He couldn’t keep his eyes open any longer, but he felt her warm lips once again on his own.

He felt her breath and heard her whispered words, her face gently pressing against his own. It wasn’t until just after midnight that Tommy woke again.

‘Pol? Polly? Is that you?’ Tommy turned his head to the side, forcing his eyes wide to see the best he could through the darkness.

For a second, he thought he saw the face of the Red Cross nurse, but then he felt a soft, warm hand take hold of his own. He tried desperately to keep his eyes open, but it was a losing battle.

‘Yes, Tommy, it’s me . . . I’m here,’ Polly whispered, her face appearing through the darkness as she leaned forward. ‘Don’t you worry, I’m not going anywhere,’ she reassured him, pushing a straggle of thick, curly hair behind her ear. The ward was in darkness, save for a little night light on the nurses’ station by the heavy swing doors. The matron was sitting bolt upright, her hands clasped in her lap. You’d have thought she was wide awake, were it not for her gentle snoring.

‘Polly?’ Tommy’s voice was croaky. ‘Can yer come closer, so I can see yer properly?’

Polly got up from her chair and carefully perched herself on the side of the bed. She put the palm of her hand on his brow. It was still hot. Feeling her touch, Tommy closed his eyes. Tears began to roll slowly down his face. Cupping his face in both hands, Polly kissed him. Tommy’s eyes fluttered open and he kissed her back. ‘I can’t believe you’re here,’ he mumbled. ‘Can’t believe I’m here with you.’

He was staring at Polly, his hazel eyes still doubtful. ‘It is you, isn’t it, Pol?’

‘Of course it’s me,’ she whispered into his ear. She could feel tears welling up in her own eyes. ‘Who else would be sat here in dirty overalls, looking like they’d been dragged through a hedge backwards?’

‘That’s my Pol,’ he mumbled, his voice becoming slurred and sleepy. ‘Building ships to win the war.’ He recited the words as though he had said them many times over, which he had. He’d never tired of boasting about his sweetheart back home. Polly kissed him gently again and looked down at the man she loved. The man she had believed was dead.