Britain is a land riven by anarchy, slaughter, famine, filth and darkness. Its armies are destroyed, its heroes dead, or missing. Arthur and Lancelot fell in the last great battle and Merlin has not been seen these past ten years. Now, the Saxons are gathering again, their warbands stalk the land, their king seeks dominion. As for the lords and kings of Britain, they look only to their own survival and will not unite as they once did under Arthur and his legendary sword Excalibur.
But in an isolated monastery in the marshes of Avalon, a novice of the order is preparing to take his vows when the life he has known is suddenly turned upside down in a welter of blood. Two strangers - the wild-spirited, Saxon-killing Iselle and the ageing warrior Gawain - will pluck the young man from the wreckage of his simple existence. Together, they will seek the last druid and the cauldron of a god. And the young man must come to terms with his legacy and fate as the son of the most celebrated yet most infamous of Arthur's warriors: Lancelot.
For this is the story of Galahad, Lancelot’s son – the reluctant warrior who dared to keep the dream of Camelot alive . . .
Acclaim for Lancelot:
'A masterpiece.' Conn Iggulden
'Stands head and shoulders above the rest.' Manda Scott
'Glorious. Tragic. Lyrical. Totally gripping.' Ben Kane
'A gorgeous, rich retelling.' The Times
'An extraordinary writer . . . an exceptional book.' Dr Janina Ramirez

I put two fingers to my mouth, feeling the swollen lips which throbbed with pain, though at least the bleeding had slowed. ‘I don’t need you to protect me,’ I said, wanting to know the colour of her eyes. Impossible now with that hood.

‘You cannot protect yourself,’ she replied, walking over to where one of the dead men’s spears lay. She burrowed a foot beneath the shaft and lifted the spear into the air, catching it with ease.

‘God will protect me,’ I said, watching her.

‘You know what those men were going to do to you?’ she asked. I did not answer that and felt my cheeks flush with heat and shame despite the cold.

She looked past me to the coracle and shrugged. ‘I knew Eudaf. He made some shoes for my mother.’

I looked down at her own boots, which were sturdy and well made, and somehow I knew that they were not Eudaf’s work but rather that she had taken them from a young Saxon whom she had killed with that bow of hers.

‘He was a good man,’ she said. This young woman who was out here in the marsh, a bow on her back, two long knives in her belt, a spear in one hand and a Saxon sword in the other. ‘Why are you taking him to Ynys Wydryn?’ I did not answer. She shrugged. ‘It doesn’t matter. I’ll see that he gets there.’

‘I don’t need your help,’ I said. Just moments ago, I had been lying in the mud, helpless and terrified. I knew what the Saxons would have done to me, just as this woman knew it, and the shame of it swamped me.

‘You know the ways?’ she asked, pointing the spear at the water, which was flat and dark and still, though the reeds bristled gently in a thin breeze. ‘You are not very skilled in that boat.’ It was almost raining now, a fine mizzle hanging in the air.

‘You’ve been watching me?’ I asked, appalled to think that she had followed me through the marsh without my knowing.

‘I wanted to see if you’d fall in,’ she grinned.

I looked at the coracle hedged in by the reeds, then at the eastern skyline where huge flocks of starlings moved like smoke. Really, I was trying to summon a reply the way a warrior might counter a spear thrust. But it would be dark soon. And I did not know the marsh well. And even those who did sometimes vanished, never to be seen again.

‘God will protect me,’ I said again, thinking of the corpses I had seen hanging above the old causeway, watching me though their eyes were long gone. The memory put a bad taste in my mouth, a sourness mixing with the coppery tang of blood.

‘Good, because my bow will not shoot when the string is wet,’ she said, walking past me down the bank to where Eudaf and the little boat waited.

‘Iselle,’ she answered, giving it to the breeze as much as to me, as if names were unimportant.

‘I’m Galahad,’ I called after her. Not that she had asked. A moment’s hesitation, and then I followed her down to the water.

Family history (he is half Norwegian) and a passion for the fiction of Bernard Cornwell inspired Giles Kristian to write. Set in the Viking world, his bestselling Raven and The Rise of Sigurd trilogies have been acclaimed by his peers, reviewers and readers alike. In The Bleeding Land and Brothers’ Fury, he tells the story of a family torn apart by the English Civil War. He also co-wrote Wilbur Smith’s No.1 bestseller, Golden Lion. In his most recent novel, the Sunday Times bestseller Lancelot, Giles plunged into the rich waters of the Arthurian legend. For his next book, he continues his epic reimagining of our greatest island ‘history’. Giles Kristian lives in Leicestershire. 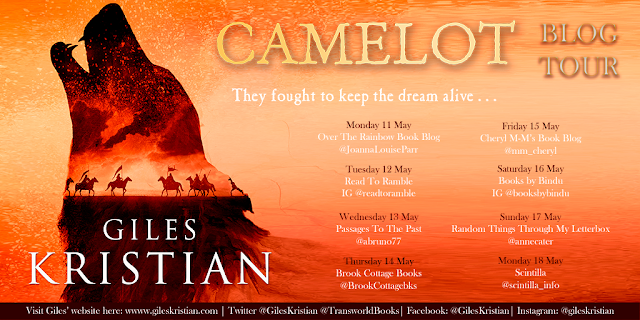