One Last Day of Summer by Shari Low - REVIEW As a flight to St Lucia leaves the runway, four passengers meet for the first time.

After escaping her controlling husband, Bernadette Manson is taking the first extravagant holiday of her new life. But when her best friend cancels, will she be strong enough to fly solo?

Tadgh Donovan is about to jet off to his destination wedding when he sees a shocking text. Has his bride-to-be written her wedding vows… or already broken them?

Hayley Ford is the wife of a top fertility specialist yet her battle to get pregnant has almost broken her marriage. Can a trip to the sun heal their relationship or should she brace for a crash landing?

Dev Robbins is crossing oceans to track down the woman he fell in love with at first sight. Will it be a one way trip to happy ever after or a return journey to singledom? 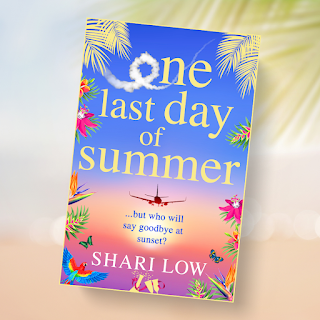 As you can see from the blurb, its pretty self explanatory what this book is about. But, don't be fooled. It's about so much more. I'm actually going to say this might be one of my favourite books of 2022 so far. I had a lot of driving to do this week so as well as having an ecopy of the book I also downloaded the audio book too so I could continue the story in the car. I couldn't tear myself away from it! The audio book is read fantastically well and is also as brilliant as the ebook.
Four characters, all with their own stories, backgrounds and issues all sitting beside on another on a 9 hour flight to St. Lucia. What are the chances of friendships forming? I don't know about you but my goodness after reading this book, every plane trip I ever take from now on is going to fall massively short. I want fellow passengers like this lot!
Bernadette Manson  -  I think might actually love her! She's the middle aged character in the story and the mother hen of this wonderful foursome. She's incredibly funny, loving and wise. With a lot of life experience, she is able to offer support and guidance to her fellow travel companions. Her life has not been easy. Thirty years with an abusive idiot has taught her a lot about herself. The topic of domestic abuse has been handled sensitively and sensibly and shows that someone doesn't actually have to lay a finger on you to abuse you. While Bernadette doesn't always take herself terribly seriously at times, she does take this issue seriously and has made it her mission to help others. She has a heart as big as the ocean and its impossible not to want her to be your best friend. I could totally relate to her.
Tadgh Donovan - Irish, sexy and dark and brooding and in a band. What more could a woman ask for!  But, he's also kind, loving and committed to the woman he's about to marry. Despite the huge worry he takes with him on the flight, he's still thinking about others and is at first perceived to be a bit stand-offish by his plane buddies, but its impossible not to be drawn to him eventually. He's a complete contrast to his brother, also on the flight. And, he misses his mammy too. Broke my heart!
Hayley Ford - Again, the author has through this character addressed domestic abuse and also the pain of infertility. Hayley starts the flight as a woman who has spent her marriage trying to appease her husband and is constantly firefighting, trying to calm a situation down before it escalates. To be living in this fight or flight mode is exhausting and Hayley has become a shadow of her former self. Her husband is a prize idiot and I wanted someone to chuck him out of the plane!
Dev Robbins - I actually lost my heart to Dev. He's such a self deprecating character who has absolutely no idea of his very natural magnetism. He's funny, charming and so so sweet. A hopeless romantic in search of that one big, all consuming love.  He has the type of best friend who has been in his life his entire life and the banter between them is absolutely fabulous!
One Last Day of Summer is ultimately a story about finding friendship and love in the most unexpected of places. It shows that life can still throw up lots of surprises to take our breath away and lots of moments that will never be forgotten. This book certainly took my breath away. Its a complete mix of laugh out loud moments, sobbing moments, heroic moments and those moments that make you grin like a stupid idiot. It has a fabulous cast of characters a wonderful array of secondary characters, some of whom I think deserve their own book! This would make a fantastic movie! Someone please do this!! A highly recommended read from me! 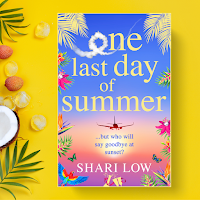 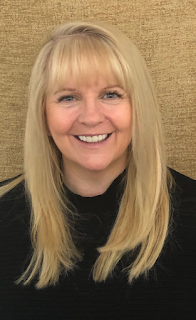 Shari Low is the #1 bestselling author of over 30 novels, including My One Month Marriage and One Summer Sunrise and a collection of parenthood memories called Because Mummy Said So. She lives near Glasgow.