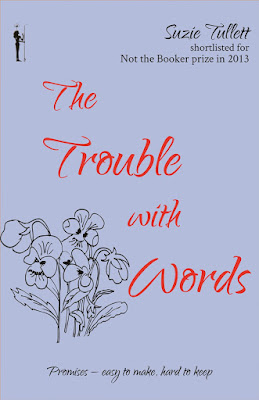 The Trouble with Words by Suzie Tullett

On the blog today we have Suzie Tullett talking about the importance of social media in book promotion. I love Suzie's work and was the editor of her book Little White Lies and Butterflies which was shortlisted for the Guardian newspapers Not the Booker Prize in 2013. Lets hear about Suzie's latest book The Trouble With Words, before her fab guest post. There's even an extract from the book at the end of her guest post. Here's wishing Suzie all the very best with her new book.

Having long made a promise to her husband, young widow Annabel has no intentions of breaking it. What she does plan to do, though, is have a baby. Not the easiest of tasks for a woman with a deceased other half, and having explored all her options, her only choice is to take the unconventional route. Setting out to find her own donor, Annabel meets Dan. Single, fun-loving and definitely not looking for commitment, this unruly blonde, blue-eyed man seems perfect for the job.

Dan wants nothing more than to find his dream woman. But with a mother intent on sabotaging his every relationship, he can't help but think he's destined to remain single. Of course, he knows his mother doesn't really want him all for herself, why else would she keep insisting he meet Maeve? Why else would she insist Dan promise to find himself a wife before she meets her maker?
Forced to negotiate matters of love, life and death, Annabel and Dan seem the answer to each other's prayers. But will they really be able to keep the promises they made? And is having a baby really the solution?

How important is social media in book promotion?

Writing can be a lonely profession. Depending on where we are in the writing process, we authors can spend days in isolation planning and penning our novels. I’m sure I’m not alone when I say social media can sometimes ease that solitude; for me, Facebook and Twitter et al often provide a link to the real world when I’m in the throws of writing a fictional one.

It isn’t just about keeping up with friends and family though. Long gone are the days where we write our books and leave everything else, including marketing and promotion, to the experts. Publishers often talk about the need for authors to have a platform, a means of visibility. In fact some commentators even suggest publishing contracts are sometimes offered or, indeed, denied, on the strength of these. So when it comes to author platforms, whilst the various social media sites make up only a part of the picture, they still play a vital role. For example, their hangouts, pages, groups and/or hashtags enable us to engage directly with our audience; some members of whom might never have actually heard of us had we not signed up to these things.

Of course, it isn’t simply about shameless self-promotion. No-one wants to hear an author continually shout buy my book, buy my book and nothing else. After all, the clue is in the title – social media. Sites like Facebook, Instagram and Twitter, to name a few, are about connecting with people. They’re a long term commitment and as much about building relationships as they are about building a readership. I’ve met some lovely people through social media, some of whom have gone on to read my books and some who haven’t. And many whom I’m happy to now call friends whether they’ve bought my novels or not.

It is through these relationships though that we’re able spread the word about our new releases, and/or up and coming events. Not only are we able to keep our friends, followers and readers up-to-date, they, in turn, might take the opportunity to share our news with their friends and so on and so on. Word of mouth is very important when it comes to promoting any product and, as book recommendations are no different, who’s to say that the buzz created around us and our novels didn’t begin with a tweet, a photo, or a status?

Then there are the joint promotion initiatives that social media can introduce us to.  We authors often collaborate, bringing writers we admire, and whose books we enjoy, to the attention of our own readerships. Because that’s the thing about social media, it isn’t all one way. Social media gives us the chance to support others and share their news in return. And as I’m an avid reader as well as a writer, it’s enabled me, just like you, to find some great reads out there. Reads I know I would otherwise have missed.

Excerpt from The Trouble With Words

Opening out the deckchair, she plonked herself down in it. “So how’s your week been?” she asked. She paused, not that she really expected a reply, but it was nice to know he was listening if nothing else. “Mine’s not been too bad,” she continued. “The shop’s still doing okay. Oh, and your mum called round the other day.” Remembering the visit all too well, Annabel tried not to scowl. “She said to say hello.”
She reached down and dipped her hand into her bag again, this time pulling out a flask of coffee. “Caffeine, just what I need after the hassle of getting here,” she said. “As usual the traffic was horrendous.”
Pouring herself a drink, she knew her ramblings were an attempt at stalling the inevitable; that she was worried about Tom’s reaction once she’d told him what she was up to. While her plans for the future might be a positive move on her part, she certainly wasn’t daft enough to think everyone would understand. If anything most people wouldn’t, especially if his mother’s reaction had been anything to go by.
She thought it strange how everyone and their dog insisted she move on, yet the second she did they created such a song and dance over it. Although if Tom did choose to join in with the dissenters, then just like them he’d only have to get used to the idea; particularly when this was entirely his fault to begin with. Annabel didn’t want to play the blame game, but just like she’d said to his mother, she wouldn’t be in this position if he hadn’t upped and died in the first place. In her mind’s eye, she could see Tom sitting opposite, his hands clasped as he patiently waited for her to tell him what was really on her mind. The man always could read her like a book.
“Okay, okay,” she said. “Just give me a second.”
She took a couple of sips of coffee, determined to reveal all. But, in spite of practicing her speech all week, now that it came to it, those well-chosen words seemed to fail her. Resting her cup on her knee and refusing to let her conviction wane, she realised she was just going to have to come out and say it.
After three, she told herself. One, two, three…
She squeezed her eyes shut, in anticipation of the lightning bolt no doubt about to strike her down.
“I’m going to have a baby,” she said. 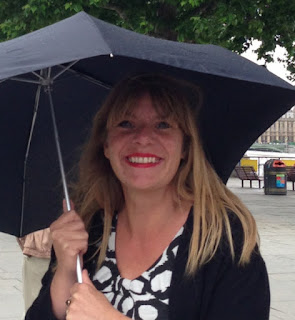 Suzie Tullett is an author of contemporary humorous fiction and romantic comedy. As well as The Trouble with Words, her novels include Going Underground and Little White Lies and Butterflies, which was short-listed for The Guardian's 2013 Not the Booker Prize. She has a Masters Degree in Television & Radio Scriptwriting and worked as a scriptwriter before becoming a full-time novelist. And when she's not tapping away on the computer creating her own literary masterpiece, she usually has her head in someone else's.