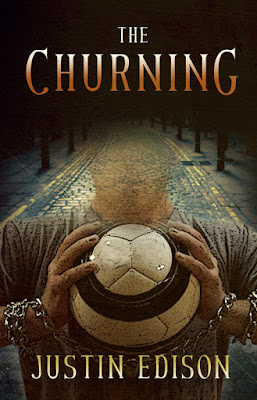 The Churning by Justin Edison

Brook Cottage Books is thrilled to welcome Justin Edison to the blog with a great author interview!

Real name. If had a name like ‘Smith’ or ‘Johnson’ I’d probably use a pen name.  (ahem Mr Edison, nothing wrong with the name Johnson though Johnston is better!!  ;-) )

I grew up in Nashville, Tennessee. It was fine—a pretty city. But I don’t honestly miss the South.

List 3 interesting facts about yourself.
I used to be really good at snooker when I spent a semester in England.
I have a talent, I guess, for getting horrendously lost on foot or in a car. Once, in England’s Lake District, I spent an entire day wandering around farms and hills with an incomplete map. The days before cell phones were for adventure.
I’ve run a full marathon (miserably) and bowled a 246 and seen a moonset over the Pacific. Each thing by itself, no big deal. But I think I must be one of the only humans alive who’s experienced all three things.

I believe it was a story called “The Ninth Call” in a little college journal in Evansville. I was always a poor short-fiction writer. I just didn’t want to believe it.

I get up early and try to do a couple hours before the kids are awake. Then I try to come back to it for a half-hour or more before it’s time to get them from school.

I wouldn’t call it a ritual, but I tend to pace around a lot when I’m writing. To me, body in motion means brain in motion. It sure confuses our cat.

It’s my second sports kidnapping story. I wanted to write something both really scary from a fresh perspective, but also (like always) something that is entirely plausible. Given the clout and lifestyle that hero Arman Hessabi is accustomed to, the trap he falls for isn’t even unrealistic. He’s human.

I believe it was my wife’s aunt. Her feedback was very positive, so that was a huge boost. One of the similarities between writing and fatherhood is that it’s always a work in progress. It takes years to have a “finished product” and that means a long time between people saying, “Good job.” There’s no performance reviews—until there’s a problem.

I’m working on a draft for “Endgame”, a war novel. My heroine is a sniper who doesn’t want to be in charge—in an impossible situation. The story’s been with me for several years, so it’s going smoothly.

Brainstorm like crazy, take notes whenever and however you can! If you need inspiration, go outside and stare at a tree branch. At camp, my daughter built a treehouse out of popsicle sticks and twine. Looking at it for a few minutes, I can put myself in that treehouse. Writers and artists should remember that everything is possible, and that can mean thinking like a kid.

Justin Edison has been writing fiction for close to 30 years. A married father (and coach) of two soccer-playing kids, he plays whenever he can and divides work time among Web site management, writing and entrepreneurial pursuits (as an aspiring inventor). He looks forward to more days of hiking the beautiful Pacific Northwest and traveling abroad. He and his family live in Greater Seattle.

Synopsis
In Justin Edison’s second novel, Persian-American soccer star Arman Hessabi wakes in chains in a house of enemies. Driven in part by an abusive older brother, the hero feels his life is complete with the glory, women and riches afforded by a Premier League striker’s lifestyle. But he meets his match in Fat Man, Captain, Huck and Kay—men who hold him in thrall somewhere in Europe. Through trials, Hessabi comes to question his own ego and position in life. But is it too late for a soccer star with no apparent power over his own fate?

Author Bio
Justin A. Edison has been writing fiction and stories for twenty-odd years. A graduate of the Evansville and Hamline writing programs, he counts among his adventures a rocking semester at Harlaxton (in the British Midlands) and a tour of the Czech Republic. His pursuits include hiking, Web site design, trying to fix the world (in too many ways) and playing soccer (rather poorly). He lives in the Seattle area with his wife, two energetic kids and a vocal cat.
The Churning is his second novel.