Promo and Extract: Christmas at the Cornish Cafe by Phillipa Ashley 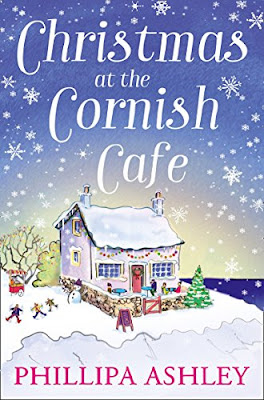 Christmas at the Cornish Cafe by Phillipa Ashley

The festive, feel-good follow-up to Summer at the Cornish Cafe.

Christmas will be slightly less turbulent than summer, won’t it? Demi certainly hopes so. She and Cal are keeping their fledgling relationship under wraps for now. But then Kit Bannen, a hunky, blond – and somewhat mysterious – writer arrives at Kilhallon Resort, and not everyone is charmed. Cal is sure that Kit is hiding something. But is he the only one guarding a secret?
Demi is busy baking festive treats for the newly opened Demelza’s cafe, but when Cal’s ex Isla arrives to shoot scenes for her new drama, Demi can’t help but worry that things aren’t quite over between them. Kit flirts with both women, fuelling Cal’s suspicions that Kit has hidden motives for staying on at Kilhallon. Then Cal has to go to London, leaving Demi and Kit to decorate the cafe for Christmas . . . all by themselves.

A storm is brewing in more ways than one. As surprises unfold and truths are uncovered, can Demi and Cal finally open up to each other about their feelings?

This second novel in the bestselling Cornish Cafe series is the perfect book to curl up with this Christmas.

Demi
He shuts the door behind us while I pull off my Demelza’s sweatshirt and T-shirt. Cal unzips his jeans and slips them down, along with his boxers. Still standing, with me braced against the lockers, Cal lifts me onto him. We’re face to face and then he’s inside me. I melt like butter on a hot scone under his touch and close my eyes to everything around me. The cafe, the lights, the dark night, the world, all are gone in those few intense, nerve-jangling seconds. There’s only me and Cal, one person, for a brief, dark, hot moment. I wish it could go on and on.
‘Whew.’
My face rests on his shoulder, my cheek skimming the soft wool cotton of his sweater. His fingers rest lightly on my back, beneath my shoulder blades and he whispers to me as I come back to awareness, like a swimmer surfacing in the cove to the sky.
‘Demi, I’ve been thinking.’ His voice is tender, serious and I’m not used to that.
‘Always dangerous,’ I breathe, still half-drowsy after the intensity.
‘That maybe, we should think about, if you don’t mind, well …’
My eyes are open. His phone buzzes again. It’s closer now. I hadn’t realised he’d even picked it up or brought it with him.
‘Damn it.’ Almost falling over, tangled by the jeans still around his ankles, he pulls up his jeans and delves in the pocket. ‘Bloody thing.’
Leave it, I say silently. Leave it and say what’s on your mind.
He glares at his phone, and he mouths at me, ‘Sorry,’ then: ‘Hello, Isla, no, I’m not busy. How are you?’
I don’t think he’s realised that he’s turned his back on me as if he doesn’t want me to hear his conversation. While he’s talking to her, his jeans slip down his hips again, leaving his pants halfway up his muscular bottom. I struggle back into my top and sweatshirt and slip past him into the tiny washroom. I close the door but can hear him, ‘hmm-ing’ and ‘OK-ing’ and the odd ‘fine’ and the final ‘OK, take care, see you soon’.
He comes out into the cafe while I scoop coffee into the filter machine. There’s no time to make cappuccinos and lattes tonight.
‘Sorry for that,’ he says. ‘It was Isla, making arrangements to come down for the shoot in a few weeks’ time. It means opening the cafe especially, because she asked if you’d cater for the cast and crew for the day. It’s extra work, but they have a decent budget and she thought we might as well have the business rather than handing it over to the outside caterers. Will that be OK?’
‘That’s awesome.’ I try to sound cheerful, because we do need the business and the publicity during and after the shoot and when the series – a historical drama about a highwayman and his aristocratic mistress – is aired will be priceless. Isla’s going to be here anyway so we may as well profit from it. It is good of her to help us – Cal – out.
‘It’s only for a day, possibly a day and a half, depending on the weather.’
‘Great. Did you know your flies are still undone?’
‘Hell. No.’ He glances down and then up at me, a wicked grin on his face. ‘That would have shocked the vicar. She’s on the committee.’
‘I’m sure she’s seen it all before. Is that headlights?’
Through the window, I spot twin white beams wavering as a vehicle makes its way over the bumpy track from the farm. The road will serve as access to the camping field in the summer but it’s not exactly public-highway standard yet. Behind the lights, I spot two more sets of lamps. The first car stops a few feet from the cafe.
Cal goes to unlock the door and groans. ‘Please, no …’
‘What?’
‘That’s Mawgan’s car.’
‘No. God, I had no idea she was on the committee.’
‘She isn’t, according to the minutes they sent me. What the hell is she doing here?’
‘I don’t know, but we’re about to find out.