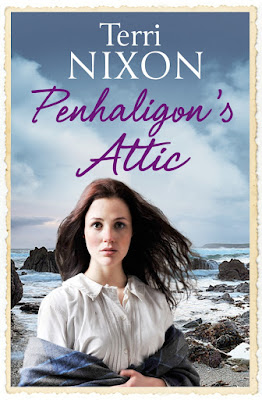 1910. Anna Garvey arrives in Caernoweth, Cornwall with her daughter and a secret. Having come from Ireland to take up an inheritance of the local pub, she and her eighteen year-old daughter Mairead are initially viewed with suspicion by the close-knit community.

Anna soon becomes acquainted with Freya Penhaligon, a vulnerable girl struggling to keep her family business afloat in the wake of her grandmother's death, and starts to gain the trust of the locals. As their friendship deepens, and Freya is brought out of her shell by the clever and lively Mairead, even Freya's protective father Matthew begins to thaw.
But when a part of Anna's past she'd long tried to escape turns up in the town, she is forced to confront the life she left behind - for her sake and her daughter's too . . .

EXTRACT
Eight-year-old Freya Penhaligon has woken in the night to a storm; aware that her fisherman father is at sea, and has not returned as expected, she sneaks from the family home to go down to the beach and wait for news.

The strength of the wind took Freya’s breath away, until she learned to turn her head to the side and down. She waited until she was able to see a little better, and watched her own feet as they sloshed through puddles towards the gate of Hawthorn Cottage, and then onto the lane. Now she could hear the sea, and smell it too, that fresh, salt tang right off the water. She strained for the sound of someone coming up the hill, for voices, footsteps, even laboured breathing, but there was only the howling wind and the boom of the tide.
Within five minutes she was tasting sea-spray on her lips, and only then did she raise her face to stare forwards, into the driving rain. Lightning flickered, and left her with an imprint of the shoreline, but she could see no people in the lingering image. Boats had been dragged as high up the beach as they could go, turned upside-down and secured with ropes and weights, but in the dark she couldn’t read the names. The bigger boats, including Papá’s Isabel, would be anchored around the headland where the harbour provided some shelter.
The black sea rolled, looking like some huge, hump-backed monster, with white eyes that only opened when it struck rocks or the breakwater; the tide was halfway up the beach, but Freya couldn’t remember how to work out if it was on its way in or out. She shouted, in case there was anyone there, but her voice was whipped away on the wind – she would find some shelter and wait.
For the first time in her life Freya felt a surge of anger towards the Papá’s friend Mr Fry; he should have turned the trawler back to shore as soon as it became dangerous, and if he had done that, Papá would already be home. Safe and dry and snoring. There was a sudden stinging in her nose and throat, and although she couldn’t feel the tears she knew they were there. Shivering, she found the place where the breakwater met the sea wall, pulled Grace’s coat straight and sat on it. She shoved her wet hands beneath her armpits and wished she’d thought to pick up gloves, then she lowered her head so her face was tucked into the little dry, quiet pocket formed by her arms and her raised knees, and waited.
After what might have been five minutes, but equally might have been an hour or more, she thought she heard something. A voice? She lifted her head, and turned it to lessen the noise of the wind. The storm was finally abating, and the sound had come from the other side of the breakwater… Freya stood up and brushed the sand off her frozen, wet hands, then felt her way through the dark, up the steps and onto the breakwater. The wind was louder up here, and gusted hard, but she heard the call again, coming from just ahead.
The thunder had gone from deafening shout to low grumble, and the swell of the sea was more rhythmic now, less fiercely unpredictable. Still, the water washed across the stone at her feet and she slipped more than once; it had been a dangerous idea to come out here, even if it meant she might find whoever was looking for her... A gull’s cry sounded, and Freya’s heart skittered, then sank as she recognised the sound. There was no one here after all, just a hungry bird. Papá said gulls would sometimes even fly at night, in order to get at the smaller fish washed up by the incoming tide.
The disappointment was almost painful, but it told her one important thing; the tide was halfway in after all, which meant Freya would need to get back up to the foot of the cliff, or perhaps even further back, to remain safe while she waited. She turned to make her way back to the beach, but a fresh surge from the sea caused her to hurry and her foot went out from under her once again. Steadying herself on one hand and one knee, she started to rise, all her attention on the safety that waited at the other end of the breakwater, and a moment later she was slapped from head to boots from behind, thrown forwards, and then crushed flat by the weight of the wave. Dragging a ragged, shocked breath, she struggled to her knees, but the backwash stole her balance once more and sent her sliding towards the edge.
Her hands slapped around frantically, trying to find something to grip, but there was only smooth stone and the tug of the tide running back to the shoreline, pulling her with it. And then she was tumbling into empty air.

I have a confession to make! Terri Nixon is a lovely friend of mine...........and I'm ashamed to say this is the first time I have ever read any of her work. What on earth was I thinking?! Look at what I have been missing out on all this time! Penhaligon's Attic had all the magic ingredients to transport to another time and place in such a way that I could almost hear the waves crashing and taste the salt on my lips. What a book!

The book opens up with a young Freya, excited about her birthday and what wonderful story her father has written her as a gift. An innocent little girl so desperate to be grown up now she is a year older. However, Freya's world is to be turned upside down by her mother's plans, leaving a devastated and hollow man, Matthew her father who struggles with his own demons.

Fast forward a few years and Freya is all grown up now and living with her father. Anna Garvey and her daughter arrive at the village amidst much speculation from the locals. They become the subject of lots of gossip and tales. Just what is Anna running from? Can Matthew fight the demons that have blighted his life? Will Freya ever find true happiness while trying to care for everyone else?

Penhaligon's Attic will sweep you away with it wonderful prose, its complex and fascinating characters and their dynamics  and its descriptions of life in a small fishing village. It is clear that Terri Nixon has done her research too ensuring historical accuracy. Having been out with Terri once on a research day out I can vouch that she puts in an awful lot of hard work to make sure she knows what she's talking about.

It is wonderful to find a book that completely and utterly absorbs you in the lives of its characters. Reading Penhaligon's Attic was almost like an addiction and I just needed to know how the story was going to end. Now, I need more!!! I need to be back in Caernoweth! Highly recommended! Fantastic read, engrossing saga and captivating storyline. Well done Terri Nixon! 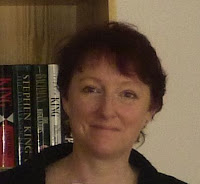 Terri was born in Plymouth in 1965. At the age of 9 she moved with her family to Cornwall, to the village featured in Jamaica Inn -- North Hill -- where she discovered a love of writing that has stayed with her ever since. She also discovered apple-scrumping, and how to jump out of a hayloft without breaking any bones, but no-one's ever offered to pay her for doing those.

Since publishing in paperback for the first time in 2002, Terri has appeared in both print and online fiction collections, and is proud to have contributed to the Shirley Jackson award-nominated hardback collection: Bound for Evil, by Dead Letter Press.

Terri also writes under the name T Nixon, and has contributed to anthologies under the names Terri Pine and Teresa Nixon. She is represented by the Kate Nash Literary Agency. She now lives in Plymouth with her youngest son, and works in the Faculty of Arts and Humanities at Plymouth University, where she is constantly baffled by the number of students who don't possess pens.