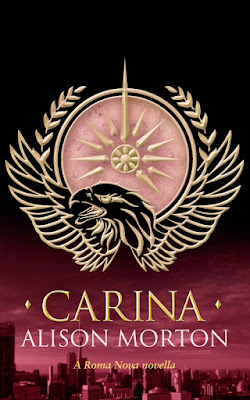 Carina Mitela is still a young inexperienced officer in the Praetorian Guard Special Forces. Disgraced and smarting from a period in the cells for a disciplinary offence, she is sent out of everybody's way on a seemingly straightforward mission overseas.

All she and her comrade-in-arms, Flavius, have to do is bring back a traitor from the Republic of Quebec. Under no circumstances will she risk entering the Eastern United States where she is still wanted under her old name Karen Brown.  But when she and Flavius discover a conspiracy that reaches to the highest levels of Roma Nova, what price is personal danger against fulfilling the mission?

Set in the time after INCEPTIO but before PERFIDITAS in the Roma Nova series, this thriller novella reveals hidden parts of Carina's early life in Roma Nova. And North America isn't quite the continent we know in our timeline...


I'm so happy to have the lovely Alison Morton back on the blog again to talk about her latest book and why she decided to write a novella! Take it away Alison!

Why write a novella?

Usually, I write full-length novels, around 100,000 words, and I’ve published six of these in the form of two trilogies (INCEPTIO/PERFIDITAS/SUCCESSIO and AURELIA/INSURRECTIO/RETALIO). Each of my characters goes on a journey and I track in detail their development into their final tempered form as they thrust their way through to the climax of the story. Not only that, I can weave plots with as many twists and turns that my strange mind can concoct; some will have clues dropped in here and there, some will be reasonably evident, and some will tease.

But over the summer, I’ve written a novella of 35,000 words. Why? It came out of a conversation with a writing colleague. Quite a few friends were publishing novellas and I wondered at their ability to write so ‘short’. My colleague announced she was doing one, too. Why didn’t I have a go? I’d finished the last book in the second trilogy and was thinking about new projects. But could I do such a short piece of work and still produce a worthwhile book?

A little background…
My books are set in an imaginary country called Roma Nova, the last remnant of the Roman Empire that has toughed it out into the modern age, but with a twist – it’s ruled by women. Many aspects of life in this alternative timeline are exactly the same as in our own, but some are very different.

The first three books, INCEPTIO, PERFIDITAS and SUCCESSIO, are episodes in Roma Novan Carina Mitela’s life at ages 24, 32 and 39. I chose to skip other years as her life wasn’t at a special crisis point until the time of each of the stories in those three books. This reflects our own lives with brief highs in a continuous flow. I would think, though, that even in the quieter periods. Carina’s life is generally more exciting than our own!

At the end of INCEPTIO, the first book, we leave Carina as a newly minted Praetorian officer setting off on a mission in the borderlands of Roma Nova. When we meet her at the beginning of PERFIDITAS, the second, she’s a captain, heading her own branch and part of the command group, albeit as a junior member. She’s confident and competent with a record of success. So a bridging point between those six years seems a good idea....

I wanted to write a standalone adventure for Carina – she deserved it – but not one with the same complexity and depth of disaster for Roma Nova as the full-length books.
CARINA is an adventure, not a complex conspiracy to save her country or its ruler from annihilation.

About half of CARINA is set in ‘North America’; even the cityscape on the cover reflects this. The Eastern United States, where our heroine Carina was raised and subsequently forced to leave, remained a danger for her so it was very tempting to bring that potential disaster into the novella. On a personal note, I’ve loved using the sights and sounds of my 2015 trip to the US and Canada in this story.

Once I had my (very short) outline, I wrote the story as it came out of my mind; its length reflects the action within it. I did set a target word count between 30,000 words and 40,000 because I wanted to see if I could do it and that’s exactly what happened!

Will I write another one? Maybe… 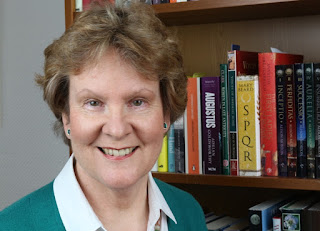 All six Roma Nova full-length novels have been awarded the BRAG Medallion. SUCCESSIO, AURELIA and INSURRECTIO were selected as Historical Novel Society’s Indie Editor’s Choices.  AURELIA was a finalist in the 2016 HNS Indie Award. SUCCESSIO was selected as an Editor’s Choice in The Bookseller. CARINA is a novella set between INCEPTIO and PERFIDITAS.

A ‘Roman nut’ since age 11, Alison has misspent decades clambering over Roman sites throughout Europe. She holds a MA History, blogs about Romans and writing.

Now she continues to write, cultivates a Roman herb garden and drinks wine in France with her husband of 30 years.