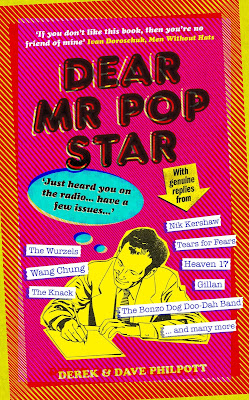 I'm delighted to welcome Dave Philpott to the blog today with a super author interview. Lets find out a little bit more about the book Dear Mr Pop Star before we get stuck into the interrogation  interview!


For nearly 10 years, ‘Team Philpott’, as their followers fondly refer to them, have been on a quite bonkers crusade, writing old-fashioned letters to pop and rock stars, picking up on genuine ambiguities within their lyrics or often deliberately misunderstanding them for comedic effect.

The letters are eminently publishable in their own right, mixing sharp wit, confusion, and mundane daily chores with trips to the shops, daytime telly, Derek’s legs playing up, and unarguable logic in relation to questioning the offending chart hits under scrutiny.

What makes this project especially deserving of attention, however, is that it has achieved a feat never before attempted or probably even thought of. The artists quite unexpectedly started to reply, writing back in just as witty and articulate a fashion, politely pointing out exactly where the original letter went wrong...or right.

Also, crucially, nearly all of the responses were procured via ''the back door of the industry'', via roadies, mutual fans, cousins of bass players, and even other famous participants telling the artists directly of the Philpotts’ written pressing inquiries. This marvellous online community, which stretched as far afield as Europe, Canada, Japan, the U.S.A, Australia and Stoke, even cultivated and organically evolved the whole surreal venture by offering up willing stars that the authors would probably not have thought of.

Under pressure from fans to go to print, a staggeringly successful Kickstarter Campaign in 2015 raised over 18k in order to self-publish, resulting in a wonderfully impressive book which went out to the hundreds of pledgers and was met with great acclaim before being made available via Amazon prompting nearly 100 five star reviews from avid readers.

Now the Authors are delighted to have been accepted by renowned publishing house Unbound. The new, second book  ‘‘Dear Mr. Pop Star’’ will also benefit from a trade edition being distributed by Penguin Random House. The book features nearly 100 of the best letters and responses from famous and legendary names spanning the whole pop and rock spectrum, all relishing their involvement and revealing their own, in many cases, hitherto unknown humorous sides within what could well be the most interactive dialogue compiled between music stars and their audience ever undertaken. Of course, it is not always possible to reach certain targets, hence many unanswered observations are also included, as they were considered too amusing not to be.

Ultimately, this book explores how when a song is released into ‘the wild’ the artist loses all control over it, especially pertaining to its interpretation. It is also testimony to the community spirit capable of being created over social media and how positive and fun it can be.


Do you write under your real name or is this a pen name you use?

It’s a pen name. it’s me working alongside my dad  but on the page we come over as overblown, exaggerated versions of ourselves. And you… let me explain what I mean by that:
I am personal friends with a lot of pop stars now as a result of this project and one told me that he was once backstage at a heavy metal gig and heard this exchange:-
Fan: ''I love that song that you wrote about that girl in the night delivering good messages to people'
Rock Star: ''That's actually about a mail train''
Fan: ''No, it's not"
The book is all about being 'that guy' who places his own interpretation on a set of lyrics and won't be told otherwise. The pop stars have been trying to bring ‘that guy’ down a peg or two for years, now is their chance.

I was involved in the first book ‘’Dear Mr. Kershaw’’... a self-published book of, guess what, deliberately deranged letters to pop, rock, punk and prog stars with genuine replies. It was this that made the Publishing World sit up and say…’’please Sirs, can we have some more?’’

Anything but, given the nature of the project. We wrote to 100’s of artists (but were still fussy as they had to ‘fit’ in to the books) asking if they wanted to contribute and we’d only dedicate our time to writing a silly but carefully crafted letter once we’d got a definite green light from them. Some letters take hours, days even, to construct. It panned out in a very organic way,  we’d go days or weeks even without writing, and then 4 pop stars would come back in a day and then 5 the next, so we would then be flat out writing for 6 weeks.

Not to force it. Inspiration pops in when when at traffic lights or looking for the chuck-outs at Waitrose. Actually put Lidls; I don’t want your readers thinking I’m posh.

The missus, she was there during the writing process and over saw it all.

Might have, but nothing I can discuss here; I only thought of it 2 days ago and already have 4k words down.

Derek and Dave Philpott are the nom de plumes of two ordinary members of the public, working with help from a small family and, crucially, a worldwide social networking community. Neither they, or anybody assisting with the creative aspects of this project had any connections with the music, entertainment, media or publishing industries whatsoever at the time of its commencement. Despite these humble origins, however, they now find themselves in the bizarre but enviable position whereby many pop stars and people within these circles are their friends "in real life’" (whatever that means!). Many artists consider "getting a Dereking" as a badge of honour, and, as one has participant succinctly put it-