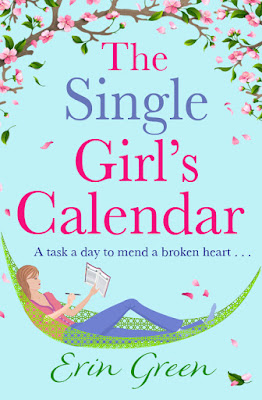 A task a day to cure a broken heart.
Esmé Peel is approaching thirty with some trepidation, but hope in her heart. If she can just get her long-term boyfriend Andrew to propose, she will have ticked everything off her 'things to do by the time you're 30' list. She didn't reckon on finding another woman's earring in her bed however, and soon she finds herself single, homeless and in need of a new plan. Her best friend Carys gives her the perfect present – The Single Girl’s Calendar – which has a different cure for heartbreak every day:

Day 1: Look and feel fabulous with a new hair style.

Day 2: Step out of your comfort zone and try something new.

Day 3: Reconnect with friends and enjoy!
Despite thinking it's a bit of a gimmick, Esmé hasn't got any better ideas, so she puts the plan into action. By the end of week one she has four new male housemates, and despite a broken heart she is determined to show Andrew she can do more than survive, she can thrive.

EXTRACT
Carys reached for Esmé’s hand and gently squeezed it.
‘So, what have you done all morning?’
‘Apart from visit cafes, I’ve walked around the city, stared in shop windows and had a meltdown when I found myself in the crime section at Waterstones…’ Esmé coughed as a wave of nausea lifted to her throat. ‘I felt fine until then. How many times has that store saved my skin with his birthday presents or stocking fillers? Not anymore. Those days are gone.’
‘In that case, I have just the thing,’ announced Carys, releasing Esmé’s hand before rummaging in the plastic bag beneath her chair. ‘Don’t laugh, but this actually helped me through the break-up with Myles.’
‘I thought I helped you get through that.’
Carys raised her head mid-rummage, her corkscrew curls bouncing as she disagreed.
‘Nope! You know nothing about break-ups, Esmé. Seriously, your relationship has been so long-term you haven’t a clue. But this…’ Carys lifted a pink boxed object onto the table top. ‘This might help.’
‘What the hell?’ said Esmé, staring at the advent calendar styled object with its tiny perforated doors.
‘It’s 100 per cent tack and it only cost a fiver but—’
‘Carys?’
‘Hear me out, Esmé… it’s worth a laugh if nothing else.’
‘Yeah, sure,’ said Esmé, lifting the calendar to read the blurb on the reverse.
Want a sassy new way to overcome a break-up? Or simply an opportunity to focus on your life? The Single Girl’s Calendar is made for you! Behind every door is a task that will help you focus on you, and you only! A whole month of pampering, mindfulness activities, caring and sharing ideas which in just four short weeks will have you feeling on top of the world! An insightful way to put a spring back into your step as a strong, independent woman!
‘Are you serious?’
Carys nodded.

I'm delighted to be able to kick off the tour with a review for this brilliant book. We've all been in the position that poor Esme finds herself in............a failed relationship, a broken heart and no idea of what to do next. Esme had her sights set on a romantic proposal, a dream wedding and a happy ever after with her long term boyfriend Andrew. However, her world is turned upside down when Esme discovers more than she bargained for when putting clean sheets on the bed. Now, her 'things to do before you're 30 list' has well and truly gone down the pan. A gift of a single girls calendar from a friend and an opportunity to house share with 4 of her brother's friends sets Esme's life down a different road than the one that she had planned for herself.

I found the idea of setting daily tasks to change your life or move it forward in some way intriguing. Especially knowing that feeling of suddenly finding yourself adrift after your carefully thought out future comes crashing down around your ears. I'll admit to finding Esme a bit annoying at times. She often acted like a petulant child but then a broken heart will do that. She was a bit of a bossy boots at times too and probably only got away with being this way because it was men she was sharing with. Women would definitely not have been as tolerant!  Her moodiness added a bit of authenticity to the story and Erin Green really depicted the human side of all her characters, flaws and all. Because all of the characters added so much into the mix of this wonderful book I do hope that Erin Green develops them all more to have their own stories in separate books.

Esme's unexpected house share with 4 men was a brilliant addition to this story. Sometimes they all got on, sometimes they didn't and each of the men brought something a little bit different into Esme's life, particularly Asa who gave Esme that little bit more perspective on what was important and what wasn't. And, through him Esme learned to put aside her shallow perception of people based on their looks. I liked him a lot!

The Single Girl's Calendar was written so well and explored a number of issue such as loneliness, infidelity and trying to find your way in the world when that world is turned upside down. Its both funny and a little bit sad in places and I became totally immersed in Esme's world. By the end of the book I really liked her and admired her bravery. It's not easy to start again when you've had your heart broken. Congrats to Erin Green on writing the type of novel that totally cheered me up and kept me glued to the pages right until the very end. Apologies to my husband and children who I ignored for 2 days solid because I couldn't put the book down! Highly recommended read. 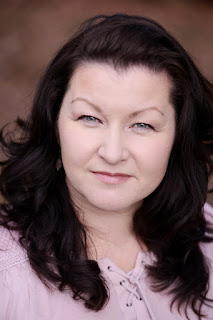 Erin was born and raised in Warwickshire, where she resides with her husband. An avid reader since childhood, her imagination was instinctively drawn to creative writing as she grew older. Erin has two Hons degrees: BA English literature and another BSc Psychology – her previous careers have ranged from part-time waitress, the retail industry, fitness industry and education. She has an obsession about time, owns several tortoises and an infectious laugh!
Erin’s writes contemporary novels focusing on love, life and laughter. Erin is an active member of the Romantic Novelists’ Association and was delighted to be awarded The Katie Fforde Bursary in 2017. An ideal day for Erin involves writing, people watching and drinking copious amounts of tea.
Facebook: www.facebook.com/pg/ErinGreenAuthor/
Twitter: @ErinGreenAuthor
Goodreads Author Page:
www.goodreads.com/author/show/16881009.Erin_Green
Instagram: www.instagram.com/erin_green_author/
Website: www.ErinGreenAuthor.co.uk