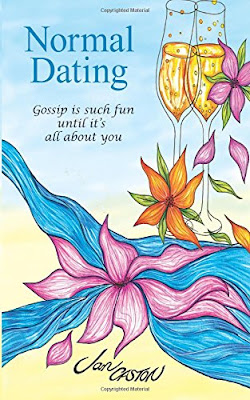 
Love is in the air at Olivia’s boozy dinner party. Who is this Ambrose everyone’s talking about? Vera can’t even remember him being there.

She can remember people moaning about how difficult it is to meet someone nice nowadays.

And why is Olivia, normally the Town Gossip, being suspiciously silent? Is it her love life, or something far more serious?

When Olivia comes up with a crazy plan to open The Normal Dating Agency to save the dress shop she runs with her sister, Angelina, from bankruptcy... and persuades Vera to run it, none of the three friends anticipate where love will strike next...

... but that's what happens with NORMAL DATING.


Today on the blog we have the lovely Jan Caston with a super author interview. Read on to find out more about Jan and her latest book!

The beautiful Channel Island of Jersey

I’m from a left-handed family, which is why I have a left-handed kitchen.
In my teens I had a longstanding love affair with a man who went on to be a major rock star. I left him for a butcher. Some might say I followed my heart and not my head because even today he’s pretty gorgeous. I have no idea where the butcher is now!
I’ve been bitten by a lion. Ask to see the scar if ever you meet me.

A poem in the Parish magazine when I was 10

Yes/ no/ perhaps?  I am very disciplined as I also work as a Film Producer/Storyliner for www.nelsonnutmegpictures.com . Deadlines are my curse and my master. Writing novels follows a different set of rules, but does mean I have more time to think things through.

Yes!  I set the alarm on my smartphone for every 45 minutes when I am writing. When it sounds, I stop writing either to go and do something else or I make yet another cup of tea. Writers need regular breaks away from the keyboard.

I was at a very boozy dinner party when people were moaning about how hard it was to find a decent date nowadays. A friend and I said we’d set up a dating agency. One of the fellas immediately elected himself Managing Director as he saw a real financial return. Needless to say the real dating agency never happened, but it was the basis of the story of Normal Dating.  Voila!

My writer friend Gwyn GB (author of Islands, Lonely Hearts and out soon, Home Help). We act as development editors for one another as we have trust and an excellent rapport.

The follow on book to Normal Dating (Book 1) in The Normal Series - New Normal (Book 2) was first draft completed in May 18 and is now going through editing. Normal Service (Book 3) is in final stage research. I am also Executive Producer for a new live action British family film called Future TX www.futuretx.co.uk which is being shot in Dorset in August 2018.

Write for yourself! Develop your own voice! Write free! And only when you are finally satisfied your work says all you want it to say, then show it to others.

Thank you Jan! I for one am totally intrigued by the rock star and the lion! I need to know more! 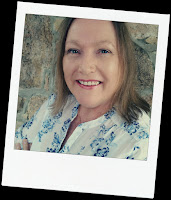 Jan Caston is a screenwriter, producer, and novelist with a whacky sense of humour and a thumping great sense of writing propriety.

In her film work, Jan works alongside British writers/director Tim Clague and Danny Stack at Nelson Nutmeg Pictures Limited. They made the live action family film: Who Killed Nelson Nutmeg? (PG 2015) which premiered at BFI LFF 2015 and which has subsequently sold around the world. In 2018 they will make a new family sci-fi adventure – Future TX – a co-production with Templeheart Films.

In her novels, Brackenbrae and Ashby published the Romantic Comedy for a more mature woman - Normal Dating - in October 2017, with two more books in the series to follow.

Jan explains why she is able to both write for a families with children, and also more racily for the more mature women. ‘It’s all about knowing what is appropriate for different audiences. That means knowing people, and what they want at different stages of their lives, really well. Why do I love writing family entertainment so much? Because I am just like the women about whom I write. Theirs is the life I’ve lived; one filled equally with laughter and drama in equal measure. There’s been a lot of adventure and mishap in my life. From flying Concorde to being broke and slumming it, I have done so many things. To me, that’s what life is all about – Living it! No matter what!’close to my heart.