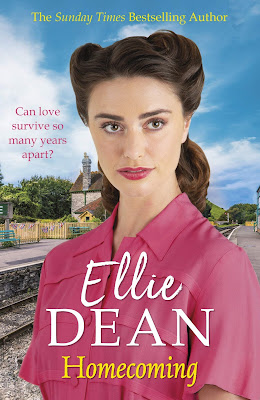 Peace has finally been declared in the Far East, but for those living at Beach View Boarding House, the news brings mixed emotions.
Peggy Reilly is devastated that her husband Jim will not be coming home for Christmas. And Sarah and Jane, who have lived at Beach View throughout much of the conflict, dread what they will find when they go back to Singapore.
Life in Cliffehaven is in a whirlwind of change as the men return from the war and Peggy’s evacuee chicks begin to spread their wings and start new lives in different corners of the world.
Peggy and Jim have longed to be together after so many years apart, but war has left them profoundly changed. Can they rekindle the loving, close relationship they’d shared before?

Beach View Boarding House stood three terraces back from the promenade, and was one of the many Victorian villas that lined the steep hill on the eastern side of Cliffehaven. Despite its name, the only view of the beach was from the room on the top floor, the others looking down into the back garden which had been turned into a vegetable plot or at the roofs of the other houses.

Three storeys high above the basement rooms, and once quite elegant, it now showed the scars of wartime in the
patched roof, pitted stucco and shattered steps which led up to the rather battered front door – but at least it was still standing, which was more than could be said for some of the surrounding villas. A gas explosion had devastated two neighbouring houses at the end of Beach View Terrace; a V-1 had destroyed the house behind, and one cul-de-sac further down had been obliterated by a V-2.

For all the damage and years of neglect because of the war, Beach View was a happy home in which Peggy Reilly had offered motherly refuge to the many evacuee girls who’d come and gone over the past six years, and provided a loving home for her father-in-law, Ron, her small daughter, Daisy, and the elderly Cordelia Finch.

Now that the war in Europe was over and the Japanese had surrendered, Peggy’s eldest daughter and young son, Charlie, had returned home with her granddaughters, and now she awaited the longed-for news that her husband, Jim, would soon be demobbed and on his way back from Burma. The girls who called Beach View home were beginning to make their own way in the world certain in the knowledge that their years with Peggy had imbued in them a sense of warmth, love and family which would remain with them for the rest of their lives.

Sarah Fuller closed her bedroom door to muffle the noise of the other girls and have some privacy while she concentrated on getting ready for the evening ahead. Her younger sister Jane was having a bath, but Danuta, Anne, Rita and Ivy were dashing back and forth between rooms in a fever of excitement while their landlady, Peggy Reilly, was downstairs with Sarah’s great-aunt Cordelia Finch trying to get Anne’s two little girls and her own small Daisy to calm down enough to eat their tea.

Beach View Boarding House was alive with the sound of chatter, laughter and running feet, for it was the eve of Rita’s wedding, and they were all preparing for the party at the Anchor to celebrate her last night as a single girl. Their menfolk, Martin, Andy, Ron, Rita’s father Jack, and the Australian bridegroom, Peter Ryan, had been tasked with staying behind to look after the three children, and were under the strictest orders to remain sober as they’d already had their bachelor night earlier in the week.

Sarah’s smile was wry as she contemplated this arrangement, for she and her sister had been living at Beach View since the fall of Singapore, and she knew all too well that if Ron Reilly was left in charge of anything there would be mayhem, regardless of his daughter-in-law Peggy’s direst of threats. Ron was a man who still followed his own path, despite having been recently married to his long-term sweetheart, Rosie, and although he was in his late sixties, he still had the vigour and propensity for mischief of a much younger man.

Sarah was still smiling as she pulled up the zipper on her favourite cream linen dress and smoothed it over her
narrow hips. Brushing out her long fair hair and carefully pinning it into a smooth chignon, she checked the result in the dressing-table mirror and was quite taken aback by her startling resemblance to her mother, Sybil. It was something she’d never realised before as she rarely took much notice of what she looked like unless it was for a special occasion. However, it seemed that the passing years had transformed and refined her, and now, at twenty-three, she had turned into something very different to the young and rather naïve girl who’d fled the invading Japanese in Singapore with her sister four years ago.

Extracted from Homecoming by Ellie Dean, out now. 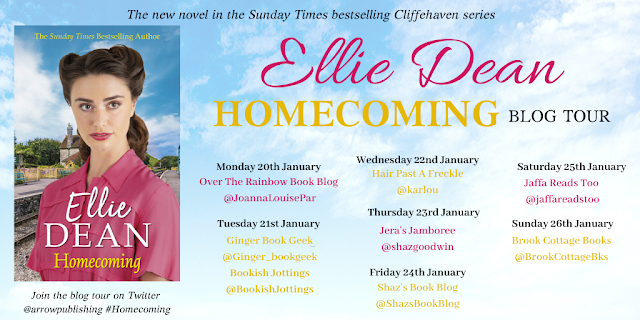